The voice can be found at the following link, just click it, then click play:
https://www.voices.com/demo_detail/195341 (ENGLISH WITH FRENCH ACCENT by Naima Moussi) 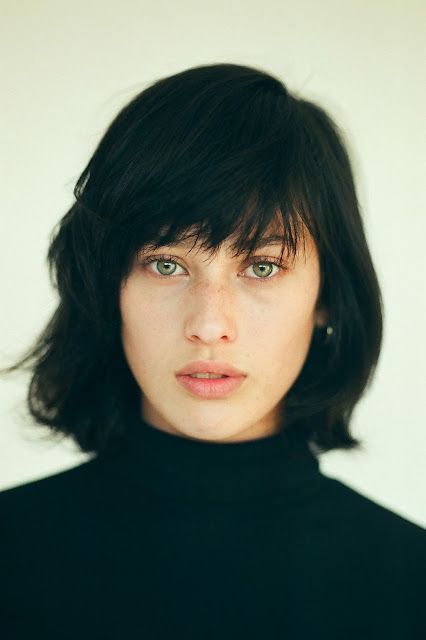 The above image is the faceclaim, whose name is Lydia Graham

Sexuality: I thought you were Oserian?


Complete Description: As with many others in the Clements family, Geneviève is among the taller people in Oseria, standing at an impressive 5'9". 120 pounds to her meek stature, Geneviève's slender aura leaves little in way of physical intimidation. Geneviève's skin holds tight against her arms, bony, with little muscle to speak of. Her slight frame extends through to her hands, her long fingers better compared to Crookmire pasta than human digits.

The majority of her physical capacity comes from the legs, which make up most of her height. Though they are not so long as to give an awkward ratio, her calves are dangerously close to being gangly. Geneviève's not a stranger to more basic athletics, such as running and jumping. Though she would not impress a trained warrior, her bipedal function is good enough to get around basic obstacles.

With the exception of the rounded tip of her nose, Geneviève's face is sharp. From jaw to the forehead, every feature is pointed to some extent. The corners of her mouth are defined, Geneviève's lips wide and set fairly low from her nose. Her eyes, copious in their verdant emerald expanse, are tilted slightly so that the outside duct is higher than the end closer to her nose. Beneath them are carved lines of tire and stress, remnants of emotions now past.

Hair: As black as pitch made of the darkest coals, it falls just atop her shoulders. Geneviève's never had good luck in growing it out much longer, and she's often seen with a cut of hair similar to a modern bob with added volume. She is able to tie her hair into a short ponytail.

Skin: A near anemic and pallid white, becoming increasingly sun-kissed as she spends time in the North.


"Straighten your back and lift your head, your enemies are watching"
- Kim Je-Ha


Personality: Geneviève, in her current state, is nearly emotionless. She knows how to feign the many thoughts and reactions she's expected to have, but she thinks of her "self" in the same way an actor might think of a role. Her family, notoriously cold and apathetic to others, has forced upon her an apathy to all things but the Clements Family name. She is openly supportive of her brothers, for whom her abilities often act much like a tool through which they might achieve their own goals. A prodigiously talented and dedicated schemer, Geneviève believes that a thorough plan of action will never fail; so one should never stray from the path. When Geneviève acts by a regimen, she can prove to be an almost unstoppable force. Yet her lack of experience with--and lack of desire to participate in--improvisation is a mighty downfall. Should her expectations not be met, Geneviève will often become desperate, a fish out of the sea, gasping for air. Already, the North has left her realizing she has not made the proper preparations for her brothers' plans. The more she learns in Valdarr, the less she understands.

Geneviève has been trained to be a ruthless opportunist, Geneviève, by nature will not spare a second thought to putting others behind to achieve her goals. This predatory nature will make her appear compulsive to many, and for good reason; her desire to achieve a set goal is often overwhelming.

Beliefs: Geneviève takes great care to think of other cultures and philosophies, without letting them affect her confidence in her own. Considerably "big-picture" in the way she carries herself, Geneviève tends to act more in line with the idea that the 'ends justify the means'. With much more interest in other peoples than most Oserians, she is one to take in the wisdoms of other people and makes for a fine conversationalist, able to quote many of the greatest thinkers of Esna. Politically, Geneviève holds a very conservative worldview, with a protectionist economic stance and moralistic societal view. As are many people in Esna, Geneviève is a die-hard supporter of the monarchist system, believing monarchs to be blessed by the gods. Geneviève sees no qualm for the government's invasion of even the most basic of rights, so long as it won't hinder her. In regards to religious beliefs, Geneviève is a staunch worshipper of the Path of the One, though tends to take the edicts less to heart than one should.

Recently, Geneviève has been... Open, so to speak, religiously. Though still an ardent believer in the Path of the One, Tsarra has entered her mind through the actions of the Seer Naiman and the wisdoms of Mara-Lee Chabot.

Least Favorite Things:​
▪Place: Secluded structures, such as cottages or dungeons​
​
▪Color: Orange​
​
▪Food: Anything that's been cured or pickled. How can the peasants bring themselves so low?​
​
▪Sound: Audible chewing​
​
▪Activity: Fixing broken items​

Habits, Behaviours, and Mannerisms: Geneviève speaks with flowy words that tend to dance around the subject she speaks of. Her way of speaking is very long-form, though she can be succinct when the situation demands. She tends to maintain good posture at any and all opportunity. Though she may see much of the world with disdain, it is impolite to slouch -- and most unladylike.

Quirks, Disorder Details, and Tics: When nervous and alone, Geneviève finds solace in mumbling as though the action may pull her from the circumstance.

Her Chronic Stress and Neglect Induced Depression manifests as a form of Alexithymia - Developmental blockage in one's hormone receptors, effectively removing emotion for as long as the "blockage" remains.


Positive Qualities: Geneviève is quite possibly the single most diligent person in Esna. If put to a task you can rest assured she will achieve it in due time ...

Negative Qualities: ... that is, assuming she doesn't betray you, first. Geneviève is nigh-compulsively predatory, willing to take any opportunity she can for her brother's gain. Though she doesn't immediately show it, she is, in every meaning of the word, untrustworthy.


Neutral Qualities: Geneviève can forget minute details quite easily. If someone fails to make an impression on her, for instance, it's likely she'll forget ever meeting them.


Sense of Humor: Geneviève knows to find jokes within the following forms as funny, and will react accordingly:
Morbid: Grim or depressing humor dealing with misfortune and/or death and with a pessimistic outlook.
Epigrammatic: Humor consisting of a witty saying such as “Too many people run out of ideas long before they run out of words.”
Highbrow: Humor pertaining to cultured, sophisticated themes.

"Life is art, art is life.
I never seperate it."
- Ai Weiwei

State of Room: Geneviève maintains tidy, organized quarters. Most rooms she takes office in, however, tend to lose such an organization while in use. She will only clean when not otherwise busy.

Wardrobe: Much like her fellow noblewomen, Geneviève wears dresses on almost every occasion. They are as bright and clean as possible. Any Oserian would be proud of such hygiene, especially in times of such exceptional filth. In the North, she's not brought much clothing. Some leathers, a few coats, some basic dresses, and her favored red dress.

Behind every great man

​
Please do not use the format without asking; it's easier to ask permission than forgiveness.​
​
Last edited: Nov 19, 2020
Reactions: GreenHarmony

"I'm not one to be concerned by a chicken." Update

"No, the pleasure was all mine." Update

"I don't visit those sorts of establishments, though for you... I might make an exception, a habit." - Genviève to Junica, Early 1000, A.T.

"Nothing in life is certain but taxes and drunk Northmen." Update

Added a name pronunciation guide. It's not perfect, but I'm also not a linguist.
I've also been writing the name as "Genvieve" quite a lot (such as in the title of the profile and the update quotes!) as that is how I say it in my head.
Also changed the title of the profile and all instances of "Genvieve" in the original post. I'm not gonna change the replies, to keep at least some instances of my mistake around.

"For an overhaul, that was... Less than satisfactory." Update

Modified formatting slightly, You probably won't notice, but if you do, good on you!

"I know that I've lost." Update

Added Kensey Scale sexuality, though it is undisclosed as well. So, y'know, it's not helpful.

"Perhaps I can keep this ship afloat yet." Update

A complete overhaul of the "Complete" Description, Hair, Eyes, and Skin sections.

"And what faction is that? Jasper's? The boy is mad, and if Asher falls this whole region will crumble under his inane management." Update

A complete overhaul of the Personality, Beliefs, Mental Disorders, Habits (Behaviors, and Mannerisms), and Quirks (Disorder Details and Tics) sections.

"I fear, Mara, that I must return to Oseria." Update

"Because marriage, to myself, is of something other than love, it is of support, and belief in each other." - Genviève to Asher, 1000, A.T.

"I have no time for this." Update

"I have not taken well to life recently." - Genviève to Ziad