A History of and Guide for The Language of Oseria and The Followers of Our GOD, The One | Tale of Banners Roleplaying Community Forum
Menu
Install the app

A History of and Guide for The Language of Oseria and The Followers of Our GOD, The One

A History of and Guide for The
Language of Oseria and The
Followers of Our GOD, The One
by Wess l'Mielle​ 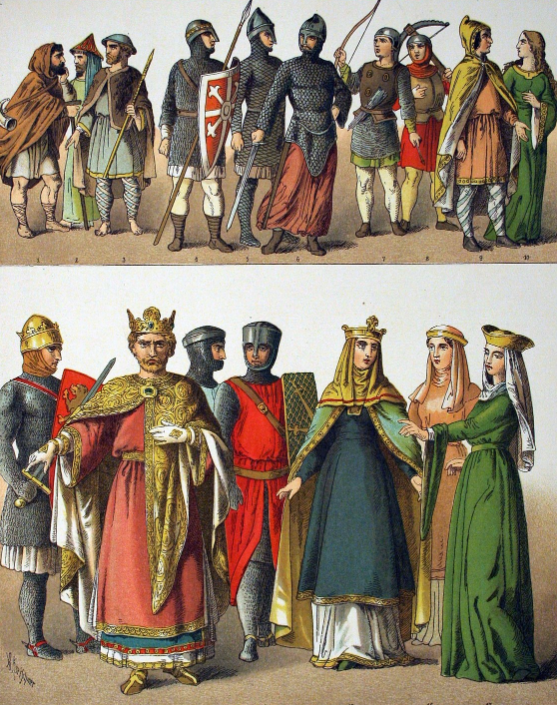 Members of Oserian Society​
Holy yet Humble Beginnings
The traditional language of Oseria is the mother tongue of all those faithful in The One. Rouen, however, has not persisted amongst the Men of Esna since the dawn of time, and as such Norvian has made its way into the mouths and minds of Saracens and Heretics.

Rouen was first spoken by The One during the Shaping of Esna, the language had long been reserved for only those who had passed to His realm above. Once Oseria had found itself free from the North, however, The One began to influence events in the world so that the faithful amongst Man may speak His tongue. For this reason, all Men of Oseria are expected to know the Norvian language that has found itself widespread amongst the rest of the world, as well as enough Rouen to communicate with the aristocracy, who are anticipated to be fluent.

The One began by planting His seeds amongst the Oserians, tending to this garden until the languages of His home and ours were indistinguishable. He gave us such an opportunity from his love for Man, and to speak Rouen is, in itself, an act of love and prayer to The One. As such, it comes as no surprise that those who find hatred in their hearts for The One make Oserian Man speak in Norvian, Korossi, or Tyn when in dealings with members of other cultures. Although speaking Rouen is a virtue, communicating in foreign languages is not considered a sin, as these languages were, too, created by The One to further divide the hateful.

In this Norvian writing, the history of Rouen as well as many grammatical and etymological structures will be explored. For any traveler’s journey to Dunn’s Gate, it is recommended that he try his trade with Rouen to communicate with local merchants and common folk.

An Expeditious Overview of Oserian Norvian
Norvian is as widespread through Oseria as Rouen as per the kingdom’s position as an agricultural powerhouse upon Esna, as well as being the trading crossroads of many Korsians and Northmen. In Oseria, there are three standard dialects that Men speak under.

The Avendale Dialect finds its center in Dunn’s Gate (Dunsgate), the capital of Oseria. Avendale itself is diverse, and as such, the dialect has many subdivisions of its own. Education plays an important part in which division one might speak, but there are many similarities between all of the manners of Avendale’s dialect. Nobility in Dunn’s Gate, for example, tend to introduce many Korsian words to their speech, whereas those from the smaller towns in the Grand Duchy speak more simply, their word choice tending towards the more evocative and less majestic.

Oakenbri, though still Norvian, can often be considered its own language. With their proximity to The North comes many Northmen influences, making those of Oakenbri not quite Oserian, yet not quite Northern. Oakenbri is characterized primarily on harder consonant sounds than in most Norvian dialects. Additionally, there are many words and phrases unique to Oakenbri. As an example: in greeting, Men of Oakenbri will often take to an informal tone, and exclaim “Na,” before asking “Vow Gatysar,” or “Greetings, has your path been kind?” When leaving, Men of Oakenbri have taken to using syllables from Norvian, Old Northerner, and Rouen that they find ‘humorous.’ Men of Oakenbri have made a recreational pastime in finding ways to make words from these noises. Such examples include such biddings of goodbye as “Schuss” and “Tchao.”

Finally, the Tarishaw Dialect. Influenced by the inherent cultural differences between Tarishaw and the rest of Oseria, this dialect often bastardizes words into similar collections of sounds. Tarishaw is also unique in that the locals will often switch between common languages without warning, sometimes mid sentence. As the tribal citizens of this duchy speak Tari, Norvian, and Rouen, more often than not the Tarishaw Dialect of Norvian includes words and influences from all three. Though these tribal Men often skip “unimportant” words, this comes not from a lack of education, rather, a desire to say as much as possible in as few seconds as they can. For this reason, the Tarimen are well regarded as masters of creative and clever insults, with some of the most memorable lines in history having been uttered by Tari lips. Many may remember the words of “Righ Audu,” who became a legendary figure when responding to an innumerable amount of Northmen invaders: “Andiugh, bidsinn o ‘deanbein,” translated, this means “Today, we make a mountain from bones.”

Roots, Other Languages, and Influences
Amongst Men, Rouen has its first of many cornerstones set by the original residents of Oseria: the savage Tari peoples. Despite being put to the blade and pushed to Tarishaw by invading Northerners, the Tarimen were able to spread much of their language and its methods into the minds of those who sought them harm. Some grammatical structures found in modern Oserian are directly or unexpectedly related to the systems of the Tarimen.

Tari, for instance, was the only language prior to Rouen where most words--both verbs and nouns--had an assigned gender. In Tari, this was often denoted by certain vowels, adjective choice, or one of three determiners. Rouen took this concept as a central structure. The most common differentiation between male, female, or neutral words is whether the word ends in -er, -ie/e, or -il. Often, there may be additions following these suffixes to denote plurality.

Norvian, of course, has had a major impact on the languages of Esna. Though it was The One who formulated our words, that does not bar the fact that his seeds came through the influences of the Northmen to guide us in the correct direction during the early days of Rouen.

Norvian brought with it most of the remaining grammar structures, as well as many aspects of vocabulary that we have since converted to the words of The One’s tongue. Old Northern, however, was exceptionally unique in holding the first linguistic capacity for what is often called sarcasm and irony. Though Norvian has come to using such mechanics in recent centuries, Old Northern brought this capacity to Rouen far sooner.

In Dunn’s Gate, Korosi, or as the Korsians refer to it, Crosi, has found influence upon the metropolitan upperclassmen. Poetry from the deserts found its way to the plains of Avendale, and so many names and nouns are often being pronounced with Korosi mannerisms. Occasionally, an aristocrat may find themselves going so far as to prefer the Korosi noun, and they will choose to use it instead. The first of these two phenomena has found its way into much of Oserian writing and is being referred to as speaking in Norcrositongue. The other phenomenon is known as speaking in “Crosiamb Meter.” In this phrase, the word “Meter” can be modified with a numeric prefix, as to specify further which exact form of Crosiamb is being used.

A poem following Crosiamb Pentameter, for instance, will contain lines of verse with five “metrical” feet, with syllables interchanging between being shortened or stressed.
“|Now IS | the WIN | ter OF | our DIS | conTENT |”

Basic Grammar
The One’s Tongue has temporal influences of many grammatical structures, as suggested above. To compact the size of this educational literature, the author Wess l’Mielle, has decided to merely focus on the grammar of the language as opposed to the reason why such structures exist.

Should readers of this literature and students of Rouen find themselves so inclined as to study such history, write a letter expressing as much to the author, and this history will be included in the next volume. Request your messenger deliver the letter to the desk of the Royal Scribehouse in Dunsgate, and wish them safe travels.

Nouns in all forms are always capitalized in Rouen, with one exception: Any form of expression of “self” (i.e I, me, mine, etc). As Rouen is the tongue of The One, this cultural rule exists for there is only one being with the right to refer to themself as a proper noun: The One. When speaking in formal tongues, the rule of capitalization extends to pronouns (with the exclusion of I/lo, for obvious reasons).

As for pronouns themselves, the list of pronouns in Rouen is as follows: 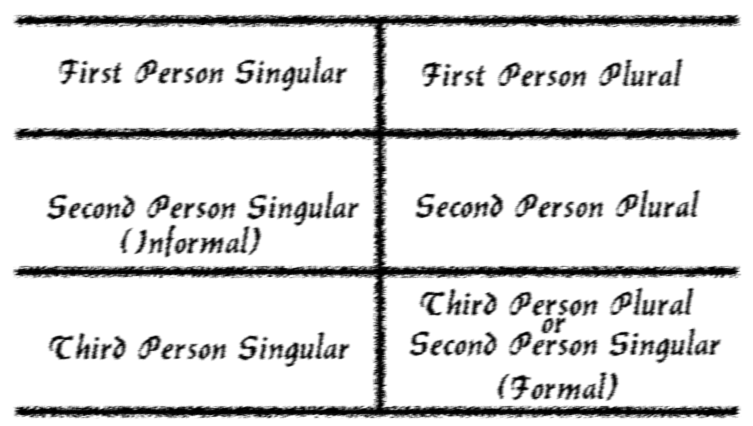 ​
One of the distinguishing features of Rouen is the use of gendered nouns, with verbs being conjugated to match the noun they interact with. Above this paragraph is the basic chart structure. To students of the language, it is advised to memorize the chart’s structure, as it will be very useful for learning verb conjugations.

In Rouen, there are three suffixes to words that classify them to be verbs. Any word ending in -et, -it, and -ot is a verb. An exception exists in the form of the word Ette, which means “to be,” it is the only verb that does not follow the same structure of conjugation as others. All other verbs follow the -it conjugation methodology. Ette will be covered separately. 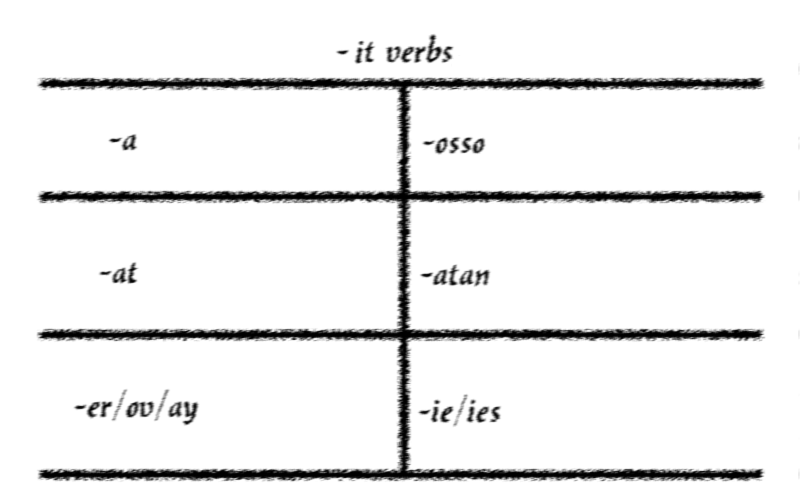 The conjugation chart above details the method by which -it verbs are modified, based on the pronoun or noun that it interacts with in a sentence (as per the first chart in this chapter). 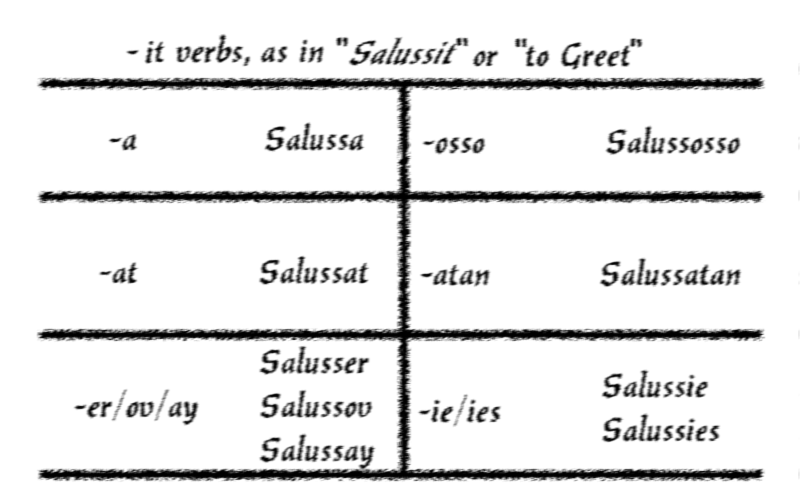 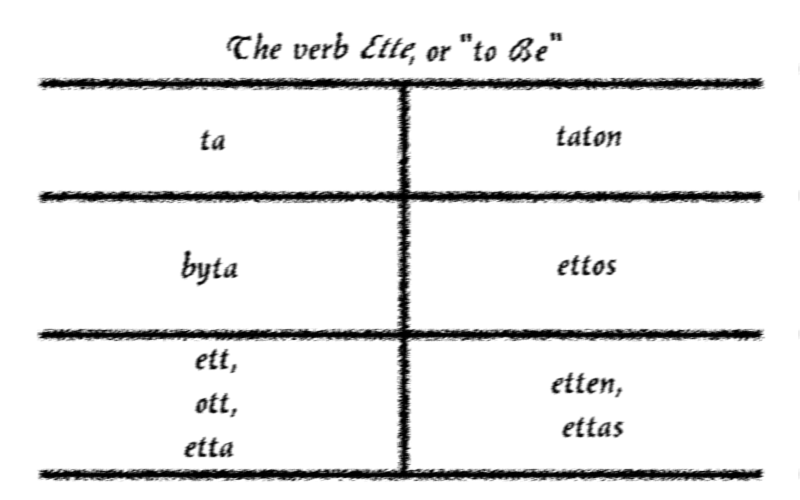 The Alphabet of Rouen
This subsection focuses on the enunciation and names of the thirty letter alphabet that Rouen uses for literary purposes. There is little to discuss with regards to history or dialect, and so this subsection will merely focus on the list of letters.

Godser - (Masculine, Si.) A general honorific meaning “Gentleman,” “Mister,” or “Lord.”​
Godsie - (Feminine, Si.) A general honorific meaning “Madam,” “Missus,” or “Lady.”​
Godseradt - (Masculine Pl.) General greeting for a group, roughly “You men,” though can be used to address crowds of mixed gender.​
Godsihr - (Feminine, Pl.) General greeting for a group, roughly “You women,” used exclusively to address crowds of feminine gender, or to insinuate that membership with a group is womanly.​
​
Know that though this fails to be a comprehensive list, it is a fine foundation from which one might build a better understanding of this beautiful language.​
Last edited: Nov 4, 2020
You must log in or register to reply here.
Share:
Facebook Twitter Reddit Pinterest Tumblr Email Share Link
Top Bottom