Found it on google whilst looking for medieval roleplay servers.

Yes, I used to roleplay a lot on FiveM (gta v modded online) and on minecraft RP servers.

Part 2 of 4
Terms & definitions
Answer these definitions using your own words. The definitions can be looked up if necessary, however copy-pasting is not allowed.
What do you define as roleplaying?

Forcing others to do actions instead of letting them choose whether they want to do the action or not.

In my eyes a "Mary-Sue" character is someone who is rather perfect and does not require any flaws. 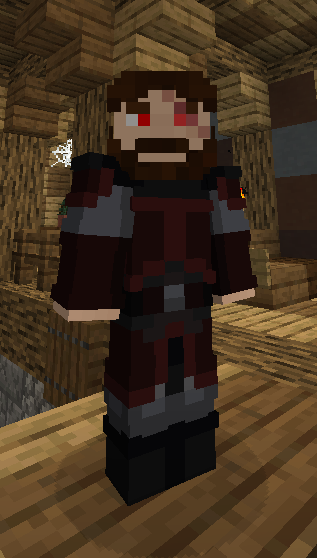 Raff Asselin is a rather nice man but can be dangerous when needed. He has a long history of hunting in the woods and prefers hunting over night. He isn't scared of the dark as he loves it more than the daylight.
He simply loves the dark nights because he likes the silence and the peace.
He has been hunting since he was 6 and learned a lot of tricks from his father who has been a hunter for his entire life.
Raff Asselin's parents got murdered by 3 thieves when he was only 14 during a raid on their camp.
Since that day he seeks revenge for their deaths.

I doubt for a second whether to help the lady or chase the criminal. My instincts tell me to seek revenge but I can't let the lady bleed out.
After a quick thought I decide to chase the thief as they might attempt to murder another person in another theft.-

Question 4
In the midst of battle, you find yourself approaching a wounded enemy soldier. The soldier is on the floor, clearly in terror as they cradle one of the dead. Enemy forces begin to advance in the distance and you know you have to act fast. The soldier then grasps at a cloth and removes it from the dead soldiers pocket. They continue to cry, and starts calling the dead soldier's name in despair. Then the soldier glances up to see you - with your weapon up - but does not care of your approach, continuing to cradle the dead soldier. You…

I slowly raise my sword above my head. I quickly look behind me to check how long I have till the enemy gets to me.
I than look back at the soldier and whisper "You'll see him soon enough, my friend" and I end his suffer.
I take one last look at the enemy closing by and start running.

I offer them some coins in exchange for a place to sleep.
If they deny I will pretend I'd be leaving but come back about 10 minutes later, trying to sneak my way into the village and I will start looking for shelter.
On my way I pay a lot of attention to my surroundings since I don't want to be spotted by the northerns.

Your application has been denied.

While in this state it is unsuitable for approving, you are welcome to try again.

The reasons for the denial are as follows:

1. Your character's skin isn't suitable for the setting. Northerners don't have red eyes. You also can't have armour on your skin before obtaining it in roleplay. Furthermore, I like to have any scars on the skin explained in the backstory.

2. Your character's backstory has a few issues.
2.a Generally, I'd like it to be a summary of a person's history than a brief description of what they're like. Maybe do a few experiences or stories from throughout their life that humanizes them.
2.b Six year olds don't usually hunt.
2.c The "my parents got murdered by X and I now seek revenge on them" is a vastly overused idea to a backstory. There is nothing wrong with keeping your characters' parents alive. If you set your character's main aspiration as vengeance to characters who won't be played on the server, it can lead to a weird experience.
2.d Consider adding detail to whatever you mention. For example, why is Ralf dangerous when needed? Because he hunts?

3. There are some issues with your open endeds.
3.a For the oserian tavern one, consider the situation presented to you better, keeping the full extent of powergaming in mind, and rewrite your response.
3.b For the northern camp one, if you've been disallowed something by a hostile(or hostile-ish party), it's probably not a good to test their limits by looping around their warnings by sneaking, etc. It's a quick way to get your character killed. Think of it this way: don't do something you wouldn't do in real life. Despite being a character on a server, he should act like a human being and hold his life to more value.​

Should you choose to re-apply, please make a new application! If you need help with it, message me(Ekk) on Discord.​