Section 3/4 - Character Creation
Here you will create an example character that could exist in the server’s history and lore. 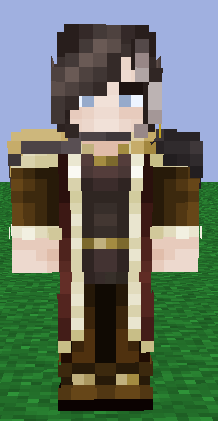 Born in the year 973 A.T. to her proud Oserian parents, there was her father; Ingolf Arvindottir the head Prophet of the Crimson Guide at the time and her mother Dotta Hendindottir. They were of some form of wealth, though considerably that money came from the spilt blood of pillaged villages or people donating to the Order. She grew up with a silver spoon in one hand in an ink quill in the other; from a very young age she was being taught of Qoaldir and what it ment to follow the holy texts and her daily prayers for glory.

Her father was clearly adamit her becoming the next true Prophet of Qoaldir and she was certain to appease her creator. She was blessed and she knew, but one day she would have to work for these earnings. When she was eleven she already had the skills of writing but her combat was lacking, thus her father started her training young and by sixteen she was nearly adept in archery, axe, and hand to hand combat. One last thing he was clear to teach her was the tranidational Gathering Hunt! A passed down tradition in which the followers of Qoaldir would do a ceremonial hunt and feast upon their capture together; she has gone through two hunts already but the third to come would be the one adorning her as the new Prophet.

However, no matter how strong her father made her, he never prepared her for the biggest thing, his death. She knew that life was eternal with Qoaldir but he never fully explained how his mortal body may fail him. So in 992 A.T. when her father and mother had left to do the next crusade; she was not prepared for the other soldiers to come home telling her of their passing. This hurt for some time, but she knew that wallowing in sadness and not honoring their lifes was the last thing she would do. Now at the age of twenty six through stress, hardships, and strength she is the new leader of the Crimson Guide.

In the midst of battle, you find yourself approaching a wounded enemy soldier. The soldier is on the floor, clearly in terror as they cradle one of the dead. Enemy forces begin to advance in the distance and you know you have to act fast. The soldier then grasps at a cloth and removes it from the dead soldiers pocket. They continue to cry, and start calling the dead soldier's name in despair. Then the soldier glances up to see you - with your weapon up - but does not care of your approach, continuing to cradle the dead soldier. You…

Great application with lots of thought put into it. Your questions are great and I can easily see the RP experience you have put into your application.

1. You didn't put a culture for the character. They should fit into one of the lore's established cultures. Feel free to ponder through them briefly or in depth to see what you think fits best for your character.

2. Your bio clearly has lots of thought and effort put into it. Introducing a new religion with a whole history spread over hundreds of years is quite a lot to do for a whitelist application. If you can integrate your ideas with an existing religion, or find a more modest way to incorporate it into existing culture and lore it would be better. I would 100% recommend reading after tsarra, The One, the religion of the sun, and the northern pantheon, all to see where your idea could potentially fit.

Done and Done! I already talked to you about the Crimson Guide! @Verando