You are using an out of date browser. It may not display this or other websites correctly.
You should upgrade or use an alternative browser.
C


Full UUID for your MineCraft account(s):

Answer - A friend of mine, long ago, spoke tales of a community, where pixels had names, and mining and crafting abundant. His name, Babadooks I, the first of his name, heir to the throne of Lands untethered, lost to time, ruined by the passing of ever august dreams and hopes of the small hearted. Now here come I, a mere apeman from the south of the world, seeking fame, fortune and wealth in this world he told, so many eons past.

(babadooks showed me it a year or two ago)

Answer - playing a character, enacting his actions, emotions, with other players doing the same.

Answer - to make your character very powerful, and also forcing other players into actions without letting them respond or giving them time to react, like instantly killing someone, or something.

Answer - using information obtained out of character to give your character an advantage in roleplay.

Answer - a cliche character, something that’s too plain, has no bad traits, and is overall perfectly boring. 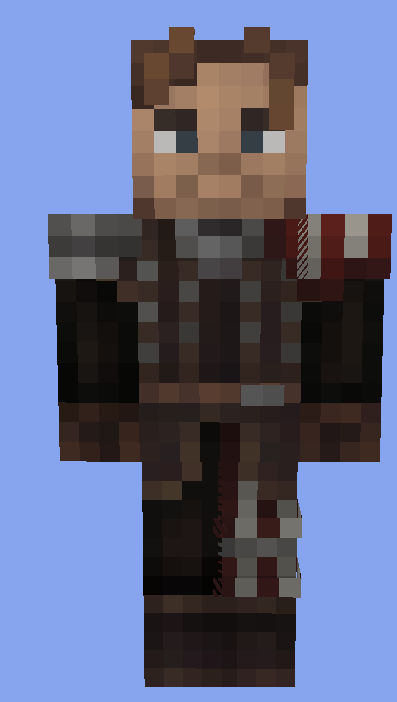 Born into a family of poverty, Bob, made his early wealth doing oddjobs for the townfolk. These oddjobs, to him, were belittling. He was seen as poor and fated to be a farmer until his death, and so the townsfolk gave him scorn and abused him. This lead to him becoming acquainted with the wrong kind of youth, he quickly saw that it was easier to get money through lying and stealing, than to do honest work, only at the behest of his reputation and dignity. He wasn't very good at lying, though, being so young, and so he was usually caught in the crimes he comitted. He became infamous for his swift hands, and thieving behaviour, and so he wasn’t liked in his town, and at the young age of fourteen, he had to escape, as his neighbors thought he had stolen their gold coins. (he had. . .) and tried to kill him. Living on the road, he didn’t miss his parents, for they only beat him and drank their sorrows of the droughts and strifes of the farmer’s life. Bob was NOT going to be a farmer! He dreamt of luxurious beds, shared with equally luxurious women of giant bosom.
He kept doing odd jobs for the wrong kind of people, hoping to rise the criminal hierarchy into larger crimes, where the bounty was plenty, as plenty as the risk of death. He always found himself in trouble. This gamble of a life he lead brought him to begin drinking, more than he should of for his young age, and this lead to him making some terrible decisions, like almost dying twice in bar fights. He was charismatic though, and found it easy to make friends that could get him out of the situation, although his bad decisions meant these friendships were short-lived. Going into his early thirties, he decided to start looking for a proper job, having grown tired of his life of risk, and is now seeking more permanent employment, although he still dreams of wealth and riches. He now lives in the Oserian city, looking to sell his sword and find a home.

Answer: Run away. Bob is no knight in shining armor, he lacks the training .. . And the shining armor!, he’d rather save his shin, although he would stumble back to the tavern and let the tavernkeep know of the bad publicity a dead lass in its alleyway will do... Although knowing Bob’s drinking habits, his slurred speech will likely sound like threatening and he might get himself beat up!

Korsian are brutal, Bob knows this. He’d be very careful, but if he were to catch glimpse of a poor naive Oserian tradesman, he’d surely weave a tail so as to rob him of his wares, or at least get a bargain price out of any wares he had that might interest Albertus. He’d probably be upset he was made to wait amongst refugees, and would likely be in a very hostile mood, which would probably not do a lot of good for the Korsian, who are very strict and close-minded.

Bob was very hungry, and even the putrid fish she was selling looked appetizing under the dim light of the swamp. He thought to eat it quick with some milk or water, and sleep fast so as to not feel any stomach ache it might produce. It was worse than advertised!, the creature looking fish was bitter and sour, like a rotten lemon that’s been left to mould over. He stomached it, I mean... It wasn’t the worst he had eaten... He was reminded of that one tavern girl he once fooled around with, back in the Oserian city.

Bob is no murderer... He’d pass on him, or yell him to leave, if no one was around to hear. Whenever he had to kill, Bob was haunted with nightmares and night terrors for years after, and he preferred his blade clean and shiny, so that it scared more than he used it... He was not one to get into battles, but if he did, he’d do as little as he could to help the killing machinery that is war.

Bob knows a few tricks, he’d show them some tavern magic tricks in attempts to trade for food, and he’d also offer to pay, in coin or in work, if they let him use at least one of the livestock houses for a few nights. Albertus is a very charismatic person, and he’d probably have no problems wooing the Northeners. Though wiser, older men could probably see the scoundrel for what he really is, and if they didn’t allow him to sleep in the village, they most likely would have him beat up for wandering into their village asking for things.
Last edited: Aug 7, 2018

1. Tell us where did you hear about ToB other than your dreams at birth.

2. It seems as if the backstory of your character leaps over important details. Could you try expanding on it slightly? What made him turn to thieving from doing regular jobs for the townsfolk? How/why did he become known for such unlawful acts that would normally be done in secret? How did this affect his personality?


Once that is done, make a comment affirming you have made these changes and your application will be reviewed again as soon as possible.

@GreenHarmony Edited! And at a young age, and with a farmer's raising, townsfolk don't give nice jobs to those with these disadvantages. I failed to mention this, and I've since clarified it! He is a youth with many problems, and I would not say he's famous for being mischievous, most likely seen as just another scum looking to benefit from the hardwork of the townsfolk.... Which I think he is.