You are using an out of date browser. It may not display this or other websites correctly.
You should upgrade or use an alternative browser.
D

Part 1 of 4
Out of Character
Provide information about yourself here.
MineCraft Username(s):
Answer - DaDominat0r

How old are you? (We need to know this as our server has an age restriction)
Answer - 16


Have you read through our rules? (Found here)
Answer - Yes


Do you agree with our rules?
Answer - Yes


How did you hear about Tale of Banners?
Answer - I found it by searching online.


Do you have any previous roleplay experience?
Answer - Yes


Is there anything you would like to add?
Answer - Nope


Part 2 of 4
Terms & definitions
Answer these definitions using your own words. The definitions can be looked up if necessary, however copy-pasting is not allowed.
What do you define as roleplaying?
Answer - Roleplaying is creating a story with other people by taking control of a role in the story.


Describe the term ‘powergaming’
Answer - Powergaming means giving your character almost superhuman abilities to the detriment of the rp as a whole. If your character is in a fight this would mean spinning anything that happens in the fight to your advantage. Instead of this, you should always have your character act realistically.


Describe the term ‘metagaming’
Answer - Metagaming means using information your roleplay character does not know to advance your character. For example, if you learn information in OOC chat, you cannot use that information during roleplay.


What is a "Mary-Sue" character?
Answer - A Mary-Sue character is a character that has the ability to do anything the player wants without consideration for any other players.


Part 3 of 4
Character Creation
Here you will create a character to use on our server.
Provide us with an ingame screenshot of your character’s skin.
Answer - 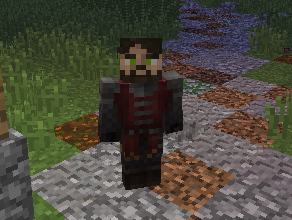 
Story & Biography:
Answer - Aesario was born 20 years ago in the Principality of Crookmire, as the only child of his father Darion and mother Jayna. As a boy, Aesario was quiet and had an aptness for learning. When he became the proper age, his father taught him the skill of archery, starting with small animals before moving on to bigger game. Aesario always felt most lively out hunting with his father, and felt a certain connection to the natural world. When he would go home and eat the cooked animals, he always imagined that they added some strength to himself, like a blessing from the gods.

As they hunted, his father would tell him ancient stories of the past, and of the former glory of the Drahl and their great empire of Tsarra, before its destruction by the foreign raiders. Aesario asked his father many questions and his father told him everything he knew. Aesario learned of the Great Death, the disease that had ravaged the Drahl settlements of Krelkar and Elswhine not long ago. Despite all of this, his father would say, our people have never lost our dignity.

In adulthood, Aesario would become a town watchman, and spend many nights staring at the blackness of the sky and studying the stars. As watchman, there never had been a time when he needed to kill someone, although he did have the occasional scuffle with a scoundrel. Aesario knew there would be times of war though, and he was always ready to fight to defend the Drahl way of life.

Aesario had always felt somewhat detached from other people, but he was never an outcast. The other townspeople respected his skill and would occasionally come by to buy the meat from his latest hunt.


Part 4 of 4
Open-ended questions
At least three must be answered. Delete the spares(if applicable). Please include at least one paragraph for each of the answered questions.

Question 3
You've gotten lost and wandered awhile into Drahl lands, eventually finding yourself in Crookmire Swamp, where you decide to settle for the night. Finding a meal to buy for the evening takes some effort, but you do come across an old crone in ragged clothing, who offers to sell you some sea-looking food. She doesn't ask much, but warns you that eating it is 'unpleasant' to outsiders. You...

Answer: Aesario gives her the 2 coins and she gives him a bowl of the stuff. It reeks and smells rotten, but Aesario doesn't mind. He pours it into his mouth all at once and ravenously devours it. Aesario smiles and thanks the woman. He preferred animal meat to sea food himself, but it was enough to satiate his hunger. He feels the pain in his stomach subside and feels more alert. As the sky gets darker, Aesario wanders across Crookmire Swamp, looking for a place to stay for the night. If no one could accommodate him, he thought, he could always sleep outside in the cool breeze with the familiar smell of the swamp.


Question 4
In the midst of battle, you find yourself approaching a wounded enemy soldier. The soldier is on the floor, clearly in terror as they cradle one of the dead. Enemy forces begin to advance in the distance and you know you have to act fast. The soldier then grasps at a cloth and removes it from the dead soldiers pocket. They continue to cry, and starts calling the dead soldier's name is despair. Then the soldier glances up to see you - with your weapon up - but does not care of your approach, continuing to cradle the dead soldier. You…

Answer: Aesario hears the man wailing and swiftly turns to face him. He calmly pulls an arrow from the pouch on his side and steadies his bow toward the man. He breathes in, and he feels his muscles tense as he pulls back the bowstring. He imagines that the man is a deer or a wild boar. He hears a *thack* as the arrow meets the man's skull. The man lets out one last cry that pierces the air. Aesario is immediately hit by the realization that he killed a man. For a moment, Aesario feels detached from the reality, even though the battle rages on around him. He just sees a blur of color, flashes of gray metal and splashes of deep red blood. He comes to his senses when he hears the galloping of hooves nearing him, which kicks up dirt into his eyes. He instinctively grabs his knife as he sees the horse and violently run toward him, its rider brandishing his sword. He grabs the neck of the horse and hoists himself up, gouging out both of the rider's eyes. The horse rears and Aesario falls into the dirt. The man yelps and yanks the reins, sending the horse off into the distance. Aesario does not feel the same listlessness he did when he killed the other man, this was simply a situation of life and death.

Answer: Aesario cautiously walks toward the village, his boots trudging through the snow. A gust of wind blows toward him, leaving him shivering. When he reaches the town, he notices that none of the Northerners are outside their huts. Aesario smells smoke coming from one of the huts, and continues to walk toward it. Suddenly a gruff voice from his right surprises him. "Wot teh fuk es a bloodeh Drahl doin' all teh way from 'ome?" Aesario turns to face the man, who has a sturdy stature and a long but not unkept beard. Aesario responds, "I only seek food and water. I have the coin to pay." The Northerner replies, "I reckon I don't need ta give ye or any of yer shite kind anything. Now 'and over yer coin or I'll be taken yer 'ead too." Aesario takes off running and hears the clank of the Northerner's armor as he follows him. After a while, the Northerner stops and rests his hands on his knees to catch his breath. He turns and slowly walks back toward the village. When Aesario is safe, he stops and views his surrounds. He sees what looks like a pond off in the distance. Although he has no experience fishing, it is his best bet.
Last edited: Jul 28, 2018

You will now be whitelisted on the server. Just remember that a mary sue can also pertain to wish fulfillment, and self-inserts.