In order to provide an adventuring experience like no other, ToB staff provides roleplay events in addition to your everyday player-to-player roleplay. While some of these focus on entirely freeform roleplay, some follow a specific but simplified D&D campaign like system, explained below. Note that the actual numbers are to be kept to the event team’s disclosure so that no roleplay is damaged by the dice/RPG aspect.


Beneath a waterfall as ancient as Esna itself, an oserian scholar by the name of Amanda Clarke has set up camp. She tends to the ruin of what was once a guild of famed adventurers and notorious mercenaries.

Amanda’s goals render around fixing up the guild to its former glory and collecting pieces of thaler, a long-forgotten secret currency used solely by the guild. By participating in events and collecting thaler for Amanda, you can earn her favour and in turn buy adventuring supplies, sharpen up your equipment at the lava forge, as well as get advice on your current quests and endeavours. The more events completed and the more thaler brought to Clarke, the more powerful the guild and her help will become.


Random encounter: the smallest but the most frequent type, this kind of encounter will find you; the only requirement is to be online. The encounters can range from wild animals and bandit attacks to more specific and unlikely ones - the odd merchant of strange goods or a mysterious fellow in need of your help. Random encounters don’t follow a compelling story but instead focus on providing a quick, fun experience when no other roleplay is available or is just difficult to find. The reward space for these is small, but pieces of thaler and other unique items can still be found on occasion.


Quest: an increase in length and magnitude over random encounters. Quests usually have a set starting point - found on the game world, in items left behind by random encounters, or offered by event characters like Amanda Clarke. Quests tend to tell a story about a character or place. There is a lot more reward involved in completion(and along the way), though it does come with much more risk than simple random encounters. The reward pool extends to unique equipment, weapons and misc items with their own lore.


Quest series/finales: the longest and most demanding of all events, usually to mix, connect and conclude stories. Suited for a bigger amount of players at a time, these can often shape the atmosphere of the lands and make some adventurers into famed heroes. Or, in failure’s case, have heavy and taxing consequences for everyone involved. Should you be well-prepared and come out lucky, there’ll be appropriate legendary loot to come with these.

Upon attending their first event, each player gets to pick a starting class that will create a canvas of a character page - a document on each character, upkept by event hosts. These classes are:


Adventurer is a jack of all trades; their card will be built towards all possible rolls, skills and abilities, but they will never excel in one particular thing above others.

Archer is a mobile class most adept at range attacks, though their defences are low and built slowly.

Fighter is an attack-oriented class, be it melee, range or otherwise, though much like archer’s, their defences are difficult to build up.

Knight is melee-oriented, with high melee attacks and defences, but otherwise lacking.

Scholar is heavily lacking at combat prowess, but they make up for it as useful allies in the sense of finding clues during events, an efficiency for solving puzzles, finding themselves to know trivia about certain places and enemies, as well as finding rarer loot.

Support is specifically medicine based, being the only class that can utilise healing mid-event as well as remove post-event debuffs. Like the scholar, they also don’t do well in combat. They share a little bit of the scholar’s misc knowledges, but not to the same extent.


Though all characters with the same class recieve an identical card upon their first event, over the course of completing events, two characters can turn out entirely different. There’s a randomised factor to getting stat buffs and abilities acquired depend on how events play out and the choices made. Abilities can be either passive or active, though they’ll only be in part disclosed by event team if necessary, remaining hidden on the card much like stats.


Equipment plays a large role in each character’s progression through events, as well. Only tiered weapons, armour and accessories will add buffs to a character in an event, visualised by specific colour coding and an event team member’s signature to confirm its legitimacy. Currently only Ekk(GreenHarmony, The_Roleplayer, Lesbomancy) and Lewis’(mcname placeholder) signatures count. The tiers are as follows:


Crafted: white description with a yellowish title. Anyone with an appropriate in-character area/property can create these, they are lored and signed by an event team member(currently only Ekk) once the blacksmith sends screenshots of creation and the desired description through Discord. Stat buff power: 2/5


Mastercrafted: white description with a gold, bolded title. Certain requirements need to be met to have a chance at a mastercrafted item, though the process is similar to that of crafted items. Stat buff power: 4/5


Artefact: black, bolded title with a gold, bolded description, usually named(for example Rothsblade instead of Iron Longsword). Occasionally found in quest finales, these pieces of equipment always have an extent of story or historical significance to them. They sometimes add abilities to the character page in use of them. Stat buff power: 5/5


The first important note is that an event will frequently have several npcs, roleplayed by the event team host. They’ll be built with either wool or terracotta, moved accordingly whenever the respective npcs move in roleplay. Here are examples of a brown bear and a group of three bandits: 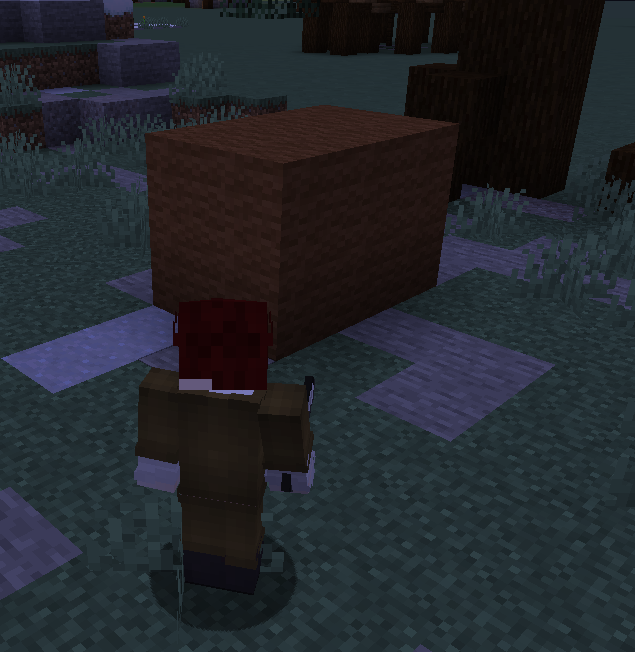 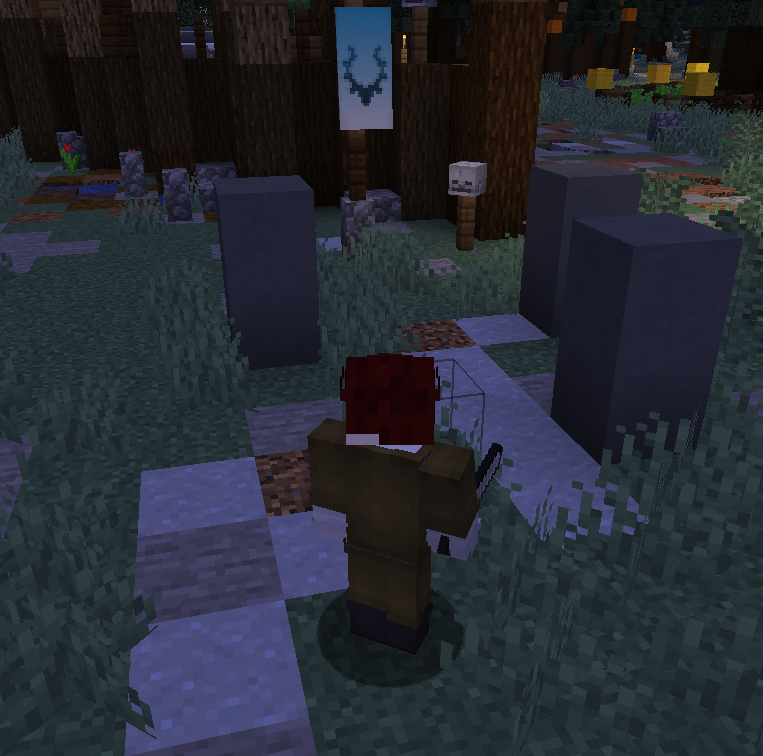 As mentioned before, each character’s hidden stat and ability card affects their ability in event combat and misc event situations. To discreetly provide this as a support beam for roleplay itself, you’d only have to emote as you would usually and wait for the event host to describe the npc’s defences, attacks, and the damage or evasion these attacks bring. Here is a combat example of how the narration by the event host would work - as you can see, you are responsible for your actions in a turn like fashion, but the event team for everything else: 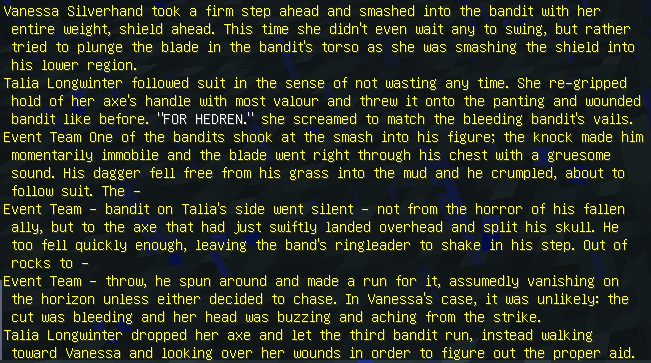 The final phase of the event, loot, will be determined in a similar fashion, though finding loot is also your initiative to extend, whether it be searching bodies, locating containers or saying the right things to surviving npcs.

Please send your questions to be added to the list!

Q: Will the character cards and the stats/abilities my character has attained ever be made public?


A: No. In order to avoid powergaming and metagaming, the character cards will only ever be seen(and edited) by the event hosts. At best, we’ll let you know about your character’s abilities that need to be known about to use.

Q: I don’t like D&D or rolls. I prefer my character’s actions to be measured by what I emote! Should I participate?


A: Though the system uses a loosely “homebrew” system to do things, the beauty of human-hosted encounters and quests is still there. Rolls can and will be modified or ignored based on the actions and creative solutions your character takes.


A: This is either done when your character attends the first event or you can privately message Green/Ekk or Lewis about it through any platform. Make sure to include your username, character name and desired class.

Q: I’m having a hard time picking the class for my character. I would like to know more about each.


A: You can try consulting Green/Ekk or Lewis privately, but not much more will be disclosed than in the thread above. The good news are that the building of a character’s stats isn’t as heavily oriented around a class but rather what a character does through events. If all else fails, just pick adventurer.

Q: I have a lored item. Myself/someone else lored it or I got it from a lootchest or freeform event. Does this benefit my character page and stats?


A: The short answer is: not really. You’ll probably have better stats than going in without anything at all, but to get actually beneficial items, you need to use the tiered system explained in the thread above.

Q: Do the character cards and tiered items help in PvP? Do they help in events not run by Green, Lewis and other approved hosts?


A: By default, not in other events. It’s a difficult thing to solve, but we’ll gradually try to increase the amount of hosts until the majority of events are done in this fashion. Though there are many benefits to the host team being as small as possible. Regarding character vs character fights, we might eventually do this per individual request. But, like with the events themselves, the stats will be kept to our disclosure and translated into narrated emoting.


A: A standard event team application won’t cut it. Due to the sensitivity of the information on host display(character cards, classes, rewarding/loot system) we cannot afford a single leak without having to redo the entire systems. Also, we need to make sure every host follows the systems in a similar manner so that a particular one isn’t directed toward powercreep of player characters. Because of this, host positions will be offered to you, the players, directly by Green/Ekk. A pre-existing staff position on ToB won’t be necessary for this to happen.
You must log in or register to reply here.
Share: Facebook Twitter Reddit Pinterest Tumblr Email Link
Top Bottom