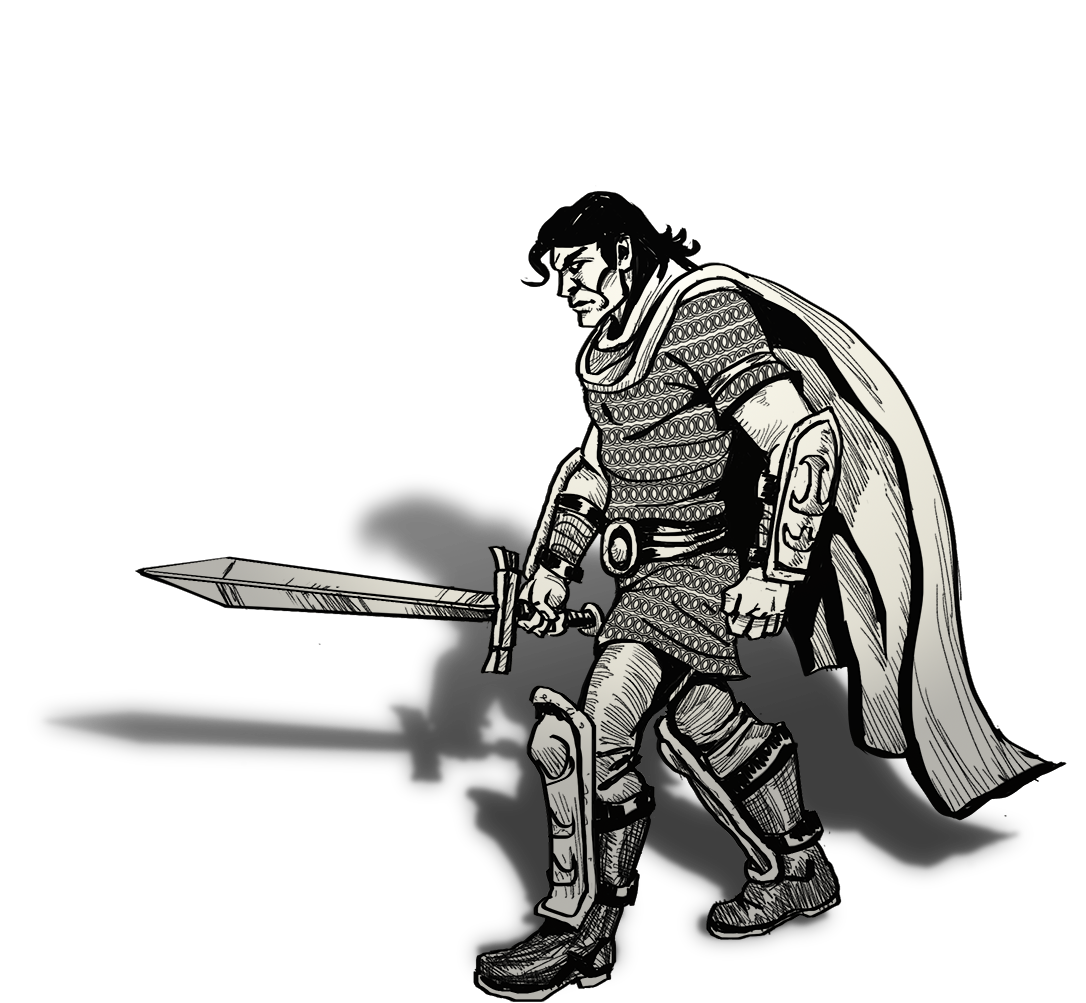 (NOT MY ART! This is a sprite from Vangorn the Murderer or Commander Cartoum from Steve Jackson's Sorcery 2 and 4, respectively.)

Smell: The smell of spices and good food.

Touch: The fine feeling of a leathery grip of a blade.

Taste: Any food from the land of Korsia, made well enough to his tastes.

Sight: The sight of grotesque monsters or copious gore.

Smell: The smell of rotting flesh from that of human or monster.

Hearing: The screech of the Giagesh.

Touch: His own blood.

Formerly Mara: "She was the one who invited me to live in Skyreach, and helped me train with weapons. During the construction of the Skyreach Barracks, Mara and I found ourselves in a deep cave that housed the remains of some of her ancestors. The only proof we were down there is my word, and a note found next to one of the skeletons."

Cyrine Ornaid: "He's very timid, and rightfully so, but his skills with bow and arrow are exceptional. He also is a very gentle soul, and one I can look up to when I'm feeling particularly pensive. He runs a stable in Skyreach with Anne Dwells."

Adan Abdirhraman: "While I can never seem to spell his last name correctly, I never call him by his last name, as we seem to be getting alone quite well. He's a bit timid and doesn't like to participate in the rowdy, barbaric traditions that the North has to offer, which I really respect about him. Being a fellow Korsian, he takes pride in the finer things in life but also knows quite well about daily life in the North. He has a very good recipe for flatbreads and honey-fried salmon, which is a delicious dish, and he's also got quite a sweet tooth, which is good for me, as I'm selling baked goods such as honey and cakes."

Torvald Gunderson: "He was the first Gunderson I met, and probably my favorite. I'm not too fond of their brash, uncivilized traditions such as their heavy drinking and general lack of hygiene, but they are mostly good people nonetheless. The reason Torvald is my favorite out of the Gunderson family is that he is an accomplished blacksmith, which is a skill I am just not cut out for, but I heavily respect. It is a very difficult profession to learn, but extremely essential in these trying times. Also, his bright red beard is sure to be an eye catcher."

Jasper Finton: "The only Finton brother I've ever met, and I'm quite glad of that fact. While Asher is supposed to be a bloodthirsty glory hound, Jasper is extremely sly and plays to people's disadvantages. I may be sarcastic and cynical, but Jasper takes it to a whole other level in how sly he is. Even after attending his wedding to a bride I've never seen before OR after the event, I don't trust him in the least."

Anne Dwells: "She's a perfectly fine young woman, but not one that I know a great deal about. We have completely differing interests, with hers suited around maintaining her vast collection of horses along with Cyrine."

Eden: "Aside from the fact that she's a foul-mouthed brute that can't finance an inn to save her life, I am completely unaware of her whereabouts. I'm not even sure where she left to in the first place!"

Amund Gunderson: "The ginger-bearded Northerner isn't very bright or hygienic, but he's quite fun to be around and usually holds his own in combat."

High King Mylo Dannak: "Sire Mylo is definitely a worthy king, and I usually respect his opinions and his judgement. Aside from being a nearly flawless fighter, outclassing the likes of most of his cousins, and of me, he had significant ties to Mara and was Regent of Skyreach in her absence, before being crowned king."

Let me know if I missed anybody on the relationships!