How old are you? (We need to know this as our server has an age restriction)
17


Have you read through our rules? (Found here)
Yes


Do you agree with our rules?
Yes

How did you hear about Tale of Banners?
My good friend Babadooks


Do you have any previous roleplay experience?
Yes


Is there anything you would like to add?
No

Roleplaying is creating a character using your imagination, and interacting with other people's characters who have been created by another person's imagination. This can involve exploring, fighting, talking, and so much more.

Powergaming is using emotes and actions which overrides anybody elses to win. You force your actions upon another player without giving them the ability to react. The most common example of this is during roleplay fights when one player simply emotes killing the other players character, not allowing them to react or attempt to save themselves.

Metagaming is using OOC information IC. For example, if you, as in the player, see a characters name in the chat, that doesn't mean your character would know the person's name magically. It is very important that in roleplay, you are able to differentiate OOC knowledge with IC knowledge.

A character that has no downsides or negative attributes. They are pretty much a jack of all trades, but are competent and capable in everything.


Part 3 of 4
Character Creation
Here you will create a character to use on our server.
Provide us with an ingame screenshot of your character’s skin. 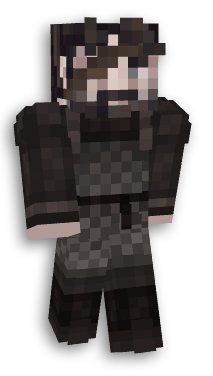 
Story & Biography:
Like most peasants during the time, Luther was born among a humble farming family in a small, isolated hamlet. Throughout his childhood, he learned most things that someone of his status would. Hunting, farming, tending to the livestock. His birth mother was taken from him during the birth of his stillborn brother. Most believed she passed simply due to heartbreak. This drove his father into a deep and ever-lasting depression. He neglected practically all of his duties, apart from the most important duty of all; drinking. Over the next few years, the farm began to fail. The livestock began to pass to disease and the crops would simply not grow. Perhaps this was a sign from the God of the Path, but whatever it was made it clear that the farm was bound to fail. This provoked Luther to join up with the local town watch, in which he lost his right eye in the very first training session. Despite this greivous injury, he pressed forward and himself perhaps the most prestigious role in the watch; The Keeper of the Loo.


Part 4 of 4
Open-ended questions
At least three must be answered. Delete the spares(if applicable). Please include at least one paragraph for each of the answered questions.

I chuckle at the sight of the defenseless woman before briskly striding up to her and repeatedly kicking her limp body. As I do this, I would see the torchlight of approaching guards, one of whom mentions how they swore they heard a scream come from my current location. This is my obvious cue to leave, and I would quickly bend down and loot any valuables that the thief could have left behind before running off. Before doing so, I deliver another harsh kick to the woman's jaw for good measure.

I excitedly eat the seafood without hesitation. After a few minutes, I would begin to feel groggy and nauseous before falling to the muddy grounds, limp and unconscious. As I awaken, I would find myself completely looted, leaving only the clothes on my back and a small water flask. I look around the muddy swamp, the only sound being the occasional ribbit of a nearby frog. I grab the water and get to my feet, but not before hearing water splash behind me. I turn around, as if I were on a pin, and gaze at my surroundings. "Anybodeh there?" With no response, I quickly begin to drink the water from the flask, before hearing the all-familiar sound of a sword being slid from its sheathe. "Aw fuuaark.."

Question 4
In the midst of battle, you find yourself approaching a wounded enemy soldier. The soldier is on the floor, clearly in terror as they cradle one of the dead. Enemy forces begin to advance in the distance and you know you have to act fast. The soldier then grasps at a cloth and removes it from the dead soldiers pocket. They continue to cry, and starts calling the dead soldier's name is despair. Then the soldier glances up to see you - with your weapon up - but does not care of your approach, continuing to cradle the dead soldier. You…

I simply stand there, staring at the two men before me. The constant screaming and clashing of swords that would usually come from a battle such as this seem to be drowned out in this brief moment of peace. I hesitate before slowly lowering my sword, letting out a deep and exasperated sigh. This moment seems to last for eternity, though it is soon interrupted as the corpse of a nearby soldier falls to the ground near you. I seem to come to my senses as I charge towards the pair, but my movements are soon halted as the head of an arrow pierces through my gambeson and straight through the chainmail underneath. I attempt to cry out in pain, yet I hear nothing come out of my mouth. Nothing but blood. I collapse onto my side, sword still in hand, as I look towards the same two men in front of me. I reach out towards them as a desperate plea for help, but the man simply ignores me. They are all that remains as my vision begins to fade, before ultimately turning to black.
Last edited: Jul 27, 2018
Reactions: Mitch

You’re almost there! Your application is pending.
There are only a few things to change for a final decision.
Make the following edits to your application:
1. Your definitions are lacking and should be expanded. Make sure to show that you have a true understanding.
2. You should be able to paint a picture in my head of exactly what happened with your answers. Expand on the questions a little.​

Congratulations! Your application has been approved.
You will now be whitelisted on the server.
Make sure to take some last peeks at relevant information and guides.
One note about your application. A mary sue also extends to a wish-fulfillment character or player insert, not just a perfect one.
You can use ToB’s Discord for communication and questions! You will find me and other whitelisters there too, ready to teach you the ropes.​
You must log in or register to reply here.
Share:
Facebook Twitter Reddit Pinterest Tumblr Email Share Link
Top Bottom