You are using an out of date browser. It may not display this or other websites correctly.
You should upgrade or use an alternative browser.
K

Section ¼: Out of Character Information

Have you read the server rules

I wanted to participate in an ongoing medieval roleplay, so I did some research on how to find that in a large, ongoing setting with other people, and found Minecraft servers, mainly because I already had Minecraft, and could come at no additional cost, then, more specifically Tale of Banners, which was one among 3 that I looked at. This is the one that I think looks the most interesting and works very well with what I was looking for.

I play a roleplay heavy game of DnD with some friends weekly (or at least we try to play weekly) and have been playing that campaign for around a year and a half now, with around another 6 months before that on a different campaign

Section 2/4: Terms and Definitions
Please answer these dimensions using your own words, the definitions may be researched however not plagiarized (copy-pasted).

What do you define as roleplaying:

Pretending to be someone who you are not, though most likely someone inspired by something you are or want to be, with the goal of storytelling with others, using these characters to live in a world that is unlike anything you could live in real life.

When you create and play a character with the sole goal to make them as powerful, and broken as possible. This could mean that one player has multiple characters all working to make one character as powerful as possible. I.E, someone who is noble, incredibly rich, never looses, and is impossible to kill.

What is a “Mary-Sue” character?

Mary-Sue’s are when the character affects the plot, rather than the plot affecting the character, or is otherwise perfect, and is typically written into worlds where one author has control over the entire story. This creates bad writing, but in roleplay situations, where there are other protagonists, this creates a warped reality where one character holds more power in an out of game perspective (rather than natural power dynamics in-game) than is fair to the other participants.

Section ¾: Character Creation
Here you will create an example character that could exist in the server history and lore.

Provide us with an in-game screenshot of your character’s skin: 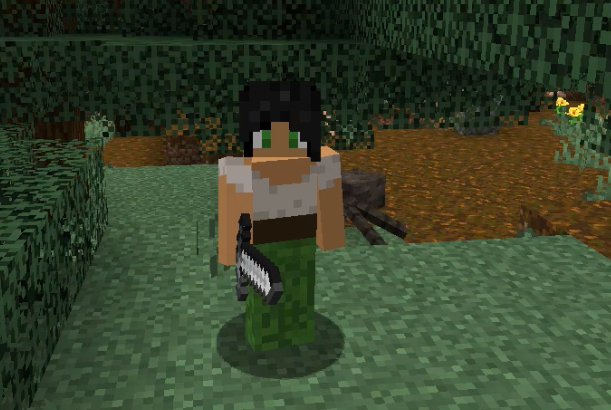 Can your character read and write?

Kathryn is the 3rd eldest of 7 children and was born to a rich, Korisian Mother. Her mother gained all of her money through her parents, and since they have passed away, has been having kids, though she wasn’t married, and drinking and betting her money away. By the time Kathryn was 18, her mother has rid their family of almost all of their money, and could no longer keep up with the lavish lifestyle that was required to stay on top of the social chain. When Kathryns eldest brother, who was 21 at the time, came to realize just how little they had, he stole what was left from their mother, and used it to afford passage onto a ship selling dry smoke to The Osirian Planes. Their passage was uncomfortable because the ship was not meant for passengers, but given that they were willing to pay a still large sum of money for the service, they crammed a couple of extra beds into the quarters.
Kathryn, being the eldest daughter, took on a motherly role for the family, while her 2 older brothers and her younger sister did what they could to earn a wage. They weren’t extremely poor, and over time, they grew to have a decent amount of money, at a commoner status. Over the next 5 years, Kathryn and her family grew up and grew apart, and since the youngest had just turned 17, and decided to move in with the 2ed eldest, she had no more purpose caring for her family.
Now, she is trying to find her place in the world without her family to take care of. She hopes to maybe move back to Telth, though would not do that until she has enough money to live comfortably there, and has a way of getting there. Kathryn is not a very religious person, more agnostic, since she has seen different religions, and grown to the conclusion that its a matter of trust in someone else, which she avoids. Still, in her younger years, she took to a habit of processing the situations she was in and her emotions by finding a sunny area and thinking things through or talking softly if there was no one around. She has seen more of the world since then and is now less nïave, but she still uses this to calm herself.
Personality: Motherly, yet pessimistic, less suspicious of people, and more just without basis assumes that they must have the capability to do bad things. Witty, and can navigate complex social situations well.
Progression: Hoping for a higher status job, but will take anything that gets her in range of gaining some power.

You stumble outside into the open air after some heavy drinking in an Oserian tavern. Just before you're about to pass an alleyway, a hooded man rushes out of it and runs for it - seemingly, he has both a blade and some jewelry on him. You take a quick peek in the alleyway to see a feminine figure collapsed on the ground, holding her hands over a bleeding wound in her torso. The thief is about to escape and the woman seems in critical condition. You…

Shout, trying to bring attention to the thief as he rushes away, before ducking into the alleyway hoping that someone will pursue him. When I find the woman, I do my best to bandage her wounds and use whatever I have on me to help with my cause, all while trying to call for some help to get her to a healer or someone who has more than rudimentary medical abilities. Assuming that I manage to get her to someone who can help, I would give my address to an employee, telling them to send a note saying that the woman is fine, and do whatever I need to do in the meantime, and then returning if there was an estimate made as to when she would wake up, so I can explain what happened and make sure she is ok. If I’m not able to get her the help she needs, and she does die, I would try and coax her into a peaceful death, and sing her lullabies until she passed away, after which, I would feel very guilty for not being about to save her.

I’d wait patiently for an opportunity to get in the city, and if there was any way to speed up the process I would look for that. I’d be willing to spend some money, but if buying your way up was considered illegal, I would not do it, especially in a Korisian culture, with high punishments, so spending the money would no longer be worth it. I would spend my time in the camp trying to make some connections with some of the richer people, and generally get a start on my business inside the city walls.

You have wandered across a seemingly endless tundra for what has felt like days. A raging snowstorm makes you unable to see more than a few meters ahead. Being almost out of resources, you are delighted to find out that you have stumbled your way to a village. Upon closer inspection, you find out it's a Northern village, and the residents are not very friendly towards strangers. What do you do in this dire situation?

Given that I have no other apparent options, I would approach the village with my hands up and beg to stay the night, in the most weakened and pathetic way possible, hoping they would take pity on me, and in return, I would help in whatever ways needed. While making my plea, I would make it clear that if they intend to hurt me, I will be on my way and no longer disturb them, so that if they don’t take me in, they wouldn’t assume the only way to do that is to kill me. I would keep my promise either way, though I would try very hard to get them to agree to shelter me.

You can use ToB’s Discord for communication and questions! You will find me and other whitelisters there too, ready to teach you the ropes.