- I do have some experience but not much.

- Main character or trying to be one. Like being the center of the story which is a bad thing. 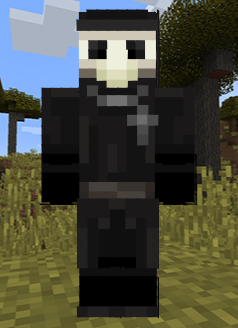 Vulk is quite a jolly man even though his voice might confuse you as he might sound really young for his age. He ensures you that he’s quite old but you might not believe him. Vulk is somewhat a bit knowledgeable in the medical side, learning a few things in his lifetime. He wishes to heal people as being a doctor and it seems to be a difficult task for him but he is determined to help. As you meet him he’s a bit shy and quiet but once you talk to him he’s quite talkative. He lived on a farm with his family in his youth part of the Oserain territory . After a few years his Father was arrested and the last of his family died from a terrible disease. He sat there helpless watching them suffering from the terrible disease as one by one they died in front of him. Just like that he became homeless.. Nowhere to call home, for months he would steal things just to survive until a man took him in. The man was a doctor or healer in sort so Vulk became an apprentice learning as many things from the man. The man became somewhat of a father figure to him over the years. Vulk Ainsworth today has sent off into the world to assist people to the best of his ability as he hopes his knowledge of medicine can help them. He's not much of a fighter as he was taught in way of medicine.

You stumble outside into the open air after some heavy drinking in an Oserian tavern. Just before you're about to pass an alleyway, a hooded man rushes out of it and runs for it - seemingly, he has both a blade and some jewellery on him. You take a quick peek in the alleyway to see a feminine figure collapsed on the ground, holding her hands over a bleeding wound in her torso. The thief is about to escape and the woman seems in critical condition. You…

-Vulk would scream for the guards and point at the thief saying ‘Thief! Thief!’, while he stumbles over to attend to the lady for injuries and attempts to save her as a life is more important than jewelry. He would comfort her by ensuring she would live and he would put pressure on her wound as the blood would soak his clothing. “Everything is ‘hic’ okay, stay calm!” Vulk would wait for guards to assist or while they take care of the thief.. He would wait by her side until help arrives and continue to comfort her saying “Everything will be okay.. I am here ‘Hic’...” Vulk would attempt to move here to a better place to treat her; he would be stumbling around and screaming for help “Please anyone! This woman needs ‘’Hic’--elp!” Until he can be a better person to help her than him because he’s drunk.

- Vulk would attempt to eat the food knowing it might be unpleasant coughing violently. He would continue to spit out the food and look at the old woman saying “Oh my, this uhh tastes great..?’ Then smiles awkwardly at her while stumbling off. He would attempt to find something that can fill him up, stumbling around and a bit sick from the food. After finding a place and greeting the person “Thank you kind sir” While gripping his stomach. He would wait until sunrise to depart and continue his journey.

Vulk would beg, promising them that I will work for them in exchange for comfort/home for a bit because I don’t want to die in the tundra. ”Please I beg of you! I’ll work in exchange for somewhere to stay! I am somewhat of a doctor so I can assist in some injuries.” He shivers as he looks up to the person, This might take a bit of convincing so he might hand over all of his things so he can seal the deal. He would work for them until his deed is done and when the tundra passes by. I’ll thank them and head back onto my journey.
Last edited: Apr 24, 2021
You must log in or register to reply here.
Share:
Facebook Twitter Reddit Pinterest Tumblr Email Share Link
Top Bottom