-I was searching for Minecraft Roleplay servers

(Please give examples, no experience is acceptable)

Please answer these definitions using your own words, the definitions may be researched however not plagiarized (copy-pasted).


-Putting yourself in the shoes of your character

Here you will create an example character that could exist in the server’s history and lore.

Provide us with an in-game screenshot of your character’s skin. 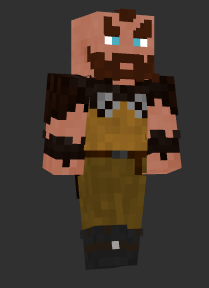 -Stornwald was born from a Grulk mother and a powerful Drahl father. His father was a strange lover of the giant peoples, and he conceived Stornwald along with his other son Hrogomir. During the night of Stornwalds conception, his father was inebriated with one of his Drahl brews, and did not notice when his partner’s twin sister joined in on the mating. The result of these events led to the birth of Stornwald and Hrogomir, and although they had different mothers, they are genetically brothers. The children's mothers proved to be too wild to raise the children with proper Drahl teachings, so their father returned to his village to raise his sons. Stornwald developed into a strong and capable Drahl man. He often enjoys fishing and creating his own merchandise and weapons. He has studied under a carpenter and bowyer as an apprentice. With the help of his teachers, he learned to be persistent in his crafts, and he appreciates excellent craftsmanship, but can be narcissistic when it comes to his own works. He has become spiritually oriented through his father's teachings and is very loyal to those he considers his family. Under his father, he learned to fight as a Drahl, and learned the importance of strength and precision. He approaches life’s challenges with vitality and headstrongness, and has proven to a brave and curious individual.

Please answer at least three of the questions to show how your character would interact with the world. Delete the spares (if applicable). Please include at least one paragraph for each question you answer.


You stumble outside into the open air after some heavy drinking in an Oserian tavern. Just before you're about to pass an alleyway, a hooded man rushes out of it and runs for it - seemingly, he has both a blade and some jewellery on him. You take a quick peek in the alleyway to see a feminine figure collapsed on the ground, holding her hands over a bleeding wound in her torso. The thief is about to escape and the woman seems in critical condition. You...


You've gotten lost and wandered awhile into Drahl lands, eventually finding yourself in Crookmire Swamp, where you decide to settle for the night. Finding a meal to buy for the evening takes some effort, but you do come across an old crone in ragged clothing, who offers to sell you some sea-looking food. She doesn't ask much, but warns you that eating it is 'unpleasant' to outsiders. You...


In the midst of battle, you find yourself approaching a wounded enemy soldier. The soldier is on the floor, clearly in terror as they cradle one of the dead. Enemy forces begin to advance in the distance and you know you have to act fast. The soldier then grasps at a cloth and removes it from the dead soldiers pocket. They continue to cry, and starts calling the dead soldier's name in despair. Then the soldier glances up to see you - with your weapon up - but does not care of your approach, continuing to cradle the dead soldier. You…

1. Your bio is the same as another application, which shares the same IP. If you are the same person, you can have multiple characters on one account, and you only need to make one application. You can have multiple mc accounts, but we list them on the same forum account.
2. If you are one person, you cannot have two characters that are related to each other. Its fine to have multiple characters, but rid yourself of the relation.
3. The answers to your open ended questions lack significant detail, please include more information. Use this section to show how your character would interact with other players and show us some examples of your roleplay.

Please explain to me what is going on with these applications. Thank you!

Once that is done, make a comment affirming you have made these changes and your application will be reviewed again as soon as possible.
Good luck! ​

I have updated the requested portions.

Your questions may be a little short, but they show enough understanding of RP now.