Qoaldir is a god for many forms of Conquest, be that of The Hunter, The Merchant, or The Soldier. Conquest is not laid in just violence but simply the effort you put into something to reach your goals. So let it be known, killing is not the way to your riches; but perseverance and strength is.​

Follow his word; for it stays true, Strike down your foe; for he would do the same, Cherish your bounty; for it is Qoaldir’s blessing. Starting in early 930 A.T. the first Prophet Aminia wrote down her visions of Qoaldir. She wrote in the sacred text as such “He came to me in a dream. A man adorned with thorns on his arms. Body stripped of flesh. Hands made of gold. He offered a hand to me. Speaking his name; Qoaldir '' We knew as the followers of him, this was his form; and the lucky Aminia was first to see it.


After years of visions passed on by the Holy Qoaldir to Prophet Aminia she had written down the texts we can only hope to interpret as his words. “Life is eternal as he is! Death in battle is his honor! Life is forever in his grace!” She spoke to the people in her downtrodden village. They listened, those lost of faith. “He will bring wealth and joy to those worthy, to those who follow him and only him alone.” Those people were surprised. This gift he was giving that of Strength, Wealth, and Pride. These people craved such, and so. Qoaldir in the early years of 598 AT had his first official followers.These texts were mostly the different view of Unity and Strength from that of Aminia. To give it a name seemed like taboo to many but it was a helpful tool to give these ideals a familiarity and form for the meaning of Conquest.

The Ten Oaths​
“1. People are worthy of his wealth, but first thy must follow his words.”


“2. To be a coward and run from the battlefield is to betray his trust in thee.”


“3. Never use Qoaldir’s name in vain for he will smite thee in time.”


“4. To control thy enemy is the finest victory.”


“5. Those who follow him must be willing to sacrifice thyself for his name.”


“6. Death in battle is the greatest honor.”


“8. To run from his grace will end in eternal exile.”


“10. Thy must pray for victory before every battle.”​

[!] In the center of a light drizzle a man stands on an old shipment box in the middle of a busy market place. In his hand he is holding out a red and black leather bound book. He opens it as he speaks to the moving crowd in a voice of woe and worry. Though his tone stayed strong it was clear he had much to say.


Audolf Arnvison: “Now is not the time for lax living! Thy must bring preparedness for what is to come!”

The crowd begins to somewhat form around the preaching man.

Audolf Arnvison: “Thy move because we hold fear in thy mortal heart!” He speaks in a bittersweet tone “But I, I know that war will be on our grounds again.”


The group that has formed hold many things, a woman with a babe, a man with a crate, a beggar holding his scraps. They listened closely to Audolf.

Audolf Arnvison: “Qoaldir has given me a vision! The enemy is close and they mean for our deaths. We must be ready, all of us.” He shakes his head. “You there!” He points to the woman with her child “Do you wish for your life to be taken? For your babe to have nothing but bones of his fellows?” he pointed to another “DO you wish to live in ruins of misery and starvation?” Then his last he spoke “Fear, Misery, Hatred, it will fill your mind and make you weak.”


The crowd watched in awe with the man's commanding voice. Simply they shook their heads no.


Audolf Arnvison: “Then rise up! All are worthy of eternal life if thy works for it!” He pumps a fist as the rain pours harder, the people not moving as they soon become soaked in the storm’s fury!

The crowd cheers, men and women speak up; “We will not fall!” one says, another saying heartily “We will survive!” and the last cheering “Eternal life will be ours!”


Audolf Arnvison: “Then raise your weapons my Brothers and Sisters! For even if our mortal bodies fail us! With Qoaldir we’re forever!” He slams the book shut as the storm cackles and lightning strikes in the distance “For his honor!”

Good: "Light Shrines, Greetings."
(Commonly used when luck is up, and the speaker is joyful)

Bad: "Night Strikes, Greetings"
(Commonly used when luck is down, and the speaker is sorrowful)​
Farewells:

Good: "Light Protect, and may his hand guide you"
(Commonly used to wish luck upon another)

Bad: "Night Collect, and may his hand shun you"
(Commonly used to wish back luck upon another)​
The OOC Plan
​
My hope and views for this group are ultimately unity among the strong. This Order is ment to be for those who wish for battle of the fittest and wealth as it’s reward. I do however require for this to be an OOC safe environment, I will not condone any form of NSFW talk, nor hateful treatment of members and non-members alike. This doesn't mean I will stop you from being rude IC. People of the Crimson Guide are not the kindest but this dosen't mean you must be outwardly unkind. We are that of faith and thus following the wrong path may be considered sinners but it is only our job to spread Qoaldir's will and not blood.


[!] At the bottom of the page a symbol is masterfully drawn of the Order's design. 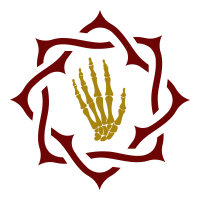