What is your favourite colour?: Currently tied between Burnt Umber and Byzantine Royal Violet

Have you read the rules?: Twiceover

Do you fully agree to the rules and...​
If yes, which is your favourite?

How did you hear about Tale of Banners?: I just looked up "Minecraft Roleplay Server" and this was the first one that had a good website

What is your previous roleplay experience?: I have been roleplaying for a long time, the first server I joined was 'Legend of Katan', then '2065', afterwards I moved to the more respectable spectrum of RP and went on to 'Akavir', playing some other Roleplay that I forget the name of, moved on to 'Rise of Kings', and when that died, moved to 'Project Ceres'. I've been recently involved in a lot of DnD and Competitive Speech, in the Improvisational Duet Acting area, which can be easily compared to Roleplay as well.

Is there anything you would like to add?: I enjoy the sport of Airsoft and the media of Anime.​

Part 2 of 4
Terms & definitions
​
What is roleplaying?: Roleplaying is the assumption of a role, of which you play. The role will more than likely be a character of your own creation, of whom you then take the first person perspective of, acting out their day-to-day life as a form of entertainment; as a sort of god, controlling everything they say and do, like little ants...

What is powergaming?: Powergaming is the blatant abuse of power. This includes forcing your actions on other characters, or doing actions that ate greatly unrealistic. Examples would include having a newborn kill 20 men with it's foot, or the following 'skit'
A: I stab you in the chest and now you're dead, I quickly pop around and shoot (B) in the head with a crossbow bolt.

What is metagaming?: Metagaming is using knowledge not available to your character IRP, such as having your character going to a secret, hidden base that one of your other characters know about, but the one you enter with being previously unaware of the base's location.

What is a Mary-Sue?: A Mary Sue is a character who is blatantly overpowered and perfect in every way, with little to no flaws and a perfect ability in every skill.​
Part 3 of 4
Character
​ 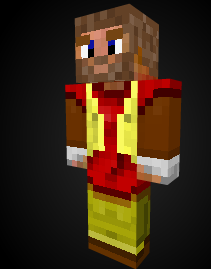 Story: Clement comes from a poorer merchant family from the Oserian nation. Taught in the ways of rationality and diplomacy from childhood, Clement is very well learned, however is very focused on creativity. His childhood was spent by his father who attempted to teach Clement the curiosity that he had already found so naturally came to himself. Clement's father, Meni, thought that the world was ruled by the intelligent, and having failed his own chances to reach such a standing, forced Clement into countless years filled of study. Much of the family's money went into books, and then eventually education, sending Clement to the nearest institution of higher learning. Clement found himself bored by all the study, and disinterested in the idea of becoming some sort of scholar or philosopher. At the age of 17, Clement ran away from the boredom, moving out to the far northern countryside. Surviving the cold in a hand-built cabin, Clement focused on the one true passion he gained from his studies; poetry. Through this passion, he became known in the local area as a popular, though massively poor wordsmith. Living in a small, secluded cabin towards the colder north, however, made it very difficult for him to have any real time to focus on such ambitions. At the age of 22, Clement then returned to the urban areas of his homeland, finally coming to the understanding of how much he had ruined his family's life. As the only son of many daughters, he was their greatest hope at prosperity. His family, however, had fallen upon hard times as of his running away. Now, Meni, and many of Clement's sisters, were dead or out wandering and begging. Clement then realized he couldn't support any of the survivors, and left once more, travelling anywhere and everywhere he might find any sort of inspiration, working at the courts of lesser nobles and merchants, whoever would commission a poet.

The man is very focused on the greater good, constantly wrought by guilt. He considers himself an idealistic dreamer, and is among the few to be educated in reading and writing.

& details: This man's posture is very laid-back, and he has slanted blue eyes. His fine, curly, grayed brown hair is medium-length and is worn in a simple style. He's got a beard and moustache, with thick eyebrows. He has a boyish build. His wardrobe is practical, with a mostly red and yellow color scheme.

​
Part 4 of 4
Open-ended questions
At least three must be answered. Delete the spare(if applicable).
​
Q1
You find yourself in an arena surrounded by high sandstone walls. Much like all the dozen of strangers in the arena, you only have a robe - the single weapon is a spear on the ground, in the very centre of the arena. You are a short sprint's distance from it - closer than most of the others - but even so the others have already spotted it and are running to grab it. They seem to be ready to fight for their lives. You...
​
Move away from the center, I'm already not a fast person, and assuming that the ​
competitors are in better shape than I, then it's likely I'd be beat to it by those who have already began sprinting. Taking my chances, I'll attempt to find a location in the arena where I could devise a good 'choreography', so to speak, to evade any attacks and tire my assaulter. Letting the others kill each other, I'm making a risk in hopes of surviving through bare luck and wits alone. Rushing at a leisurely pace to the nearest wall, I'd avoid any confrontation. Looking back out into the moshpit of combat towards the center, I'd ready myself, and do my best to tear apart the upper half of my robe, giving me a makeshift cloth of which I could use to choke someone, or catch the spear from an unprofessional opponent, effectively disarming them. Getting into a stance, putting my feet about 2 feet apart from each other, one facing forward, the other 90 degrees to the right, I would now be prepared for any competitors who choose to come my way.


Q2
You're heading home after some drinking at the tavern. Just before you're about to pass an alleyway, a hooded man rushes out of it and runs for it - seemingly, he has both a blade and some jewellery on him. You take a quick peek in the alleyway to see a feminine figure collapsed on the ground, holding her hands over a bleeding wound in her torso. The thief is about to escape and the woman seems in critical condition. You...​
Completely avoid the thief, walking past the alley at a slower pace, ​
Her goods can be replaced, however expensive they were. Once the thief is well gone, I'd return to the alleyway. Turning down it, and avoiding stepping in anything deplorable, I'd rush down towards the woman. I'd fall to my knees next to her, inspecting her wound(s), and whether she's still alive, or will remain so much longer. In the case that the wounds are not immediately fatal, or that she won't be soon dead, I'd pick her up, rushing her over to the nearest barber or physician. If, however, she's dead or is soon to be, I would sigh, collapsing to the ground, one more wrong action to add to the list. In the latter scenario, I'd eventually pick myself back together, and attempt to deduce who exactly she was, so I may inform her family. At the end of the night, I'd return to the tavern, whether to drink or for a place to sleep, the night will decide.

Q3
You've gotten lost and wandered awhile, eventually finding yourself in Crookmire Swamp, where you decide to settle for the night. Finding a meal to buy for the evening takes some effort, but you do come across an old crone in ragged clothing, who offers to sell you some sea-looking food. She doesn't ask much, but warns you that eating it is 'unpleasant' to outsiders. You...
​
Raise an eyebrow, ​
look at her questioningly, and decide to purchase it. Of course, I don't quite plan to eat it myself, after that kind of sales pitch, but it seems to be quite useful in some more mischievous manners. After all, I can easily go one night hungry, especially if it means holding on to a weapon, powerful or not. Making my way out of the swamp the following morning, I'd devise a plan to test this out on someone, perhaps a nobleman of whom I have a qualm with. If my assumption is right, I could have found a very proper poison. My head, swimming with ideas, gives me many-a moment before realizing how terrible of a thing it would be to do something along the lines of poison. Looking for the nearest bog in this marsh, I would dump whatever 'food' this is into the water. Walking away, I would quickly trip on a fallen log, not paying any attention to the path, moreso focused on my poetry.

Hello, my name is NTE_Killer4life and I shall be reviewing your application today. It has been put on ...
PENDING
I know it's a bit to fix but you can do it.
Please make the challenges above within the span of 48 hours from the time reviewed. Failure to do so will result in denial of the application and you will have to reapply 24 hours from the denial date. Message me or reply here when you made the changed and I'll take another look.

The changes have been made, I hope they are up to standard.