OFFICIAL The West Wall of Dunsgate

The Greatest of Defenses 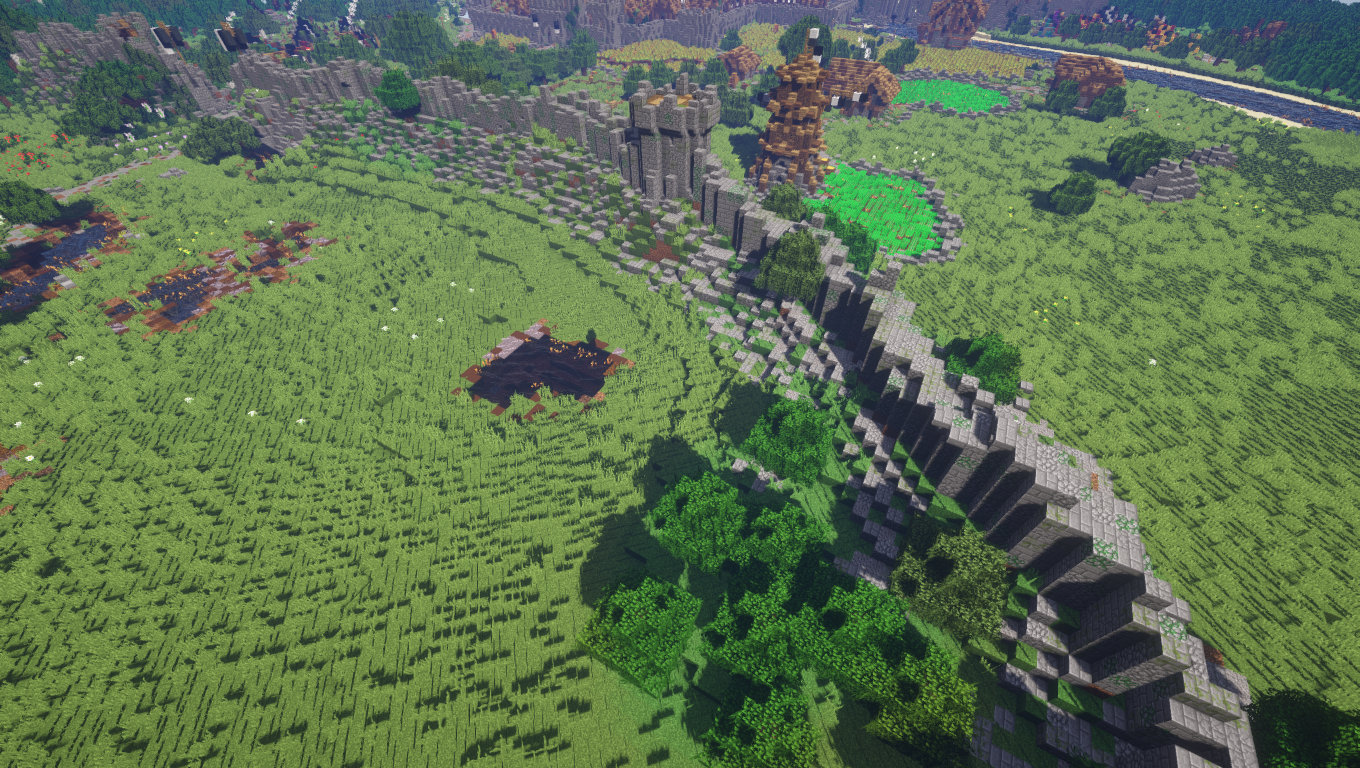 The Westwall, a structure that now lies in ruin, once stood for the growing independence of the Oserians, and for their new ways. The persons who built it, persons with strong hands, were the same persons who built the city, and the same that would see their children expand their home beyond their borders.

History
In the Year 110 B.T., The Oserians had just been removed from the flintswood after a dispute with the Jarl of Flintswood, and the city of Dunsgate had just been founded. Baldyr researched several structures inside the ancient ruins of Sin Kath. He used his new knowledge, combined with his advanced skills working in Vardheim, to build a wall that would stand for centuries without challenge. King Ardyn, the uniter, king of the North, first had the wall built by Baldyr of Vardheim around the time of the Rise of the kingdom of Moriva. Moriva was a recently expanding nation of Drahl that threatened the southeast of the Northern Borders. Moriva threw its forces against the wall countless times to no avail, causing the structure to gain a reputation as a ‘killer of killers’.

The wall stood for almost 4 centuries, being repaired regularly to defend the west from invaders. After each repair, the new kings believed in the walls majesty, and contributed to its defenses, adding more cost onto the already lavish structure.

Shortly before 252 A.T., The Foreign policy of Oseria shifted, to on of an offensive nation. The wall took less precedence over closer defenses, as the ruler of Oseria prepared for war against the North. The wall was no longer the main line of defence, and it lost the resources needed to keep it repaired.

The wall would no longer be repaired on a regular basis, and by the time of the Korsian standoff, the Oserian wall was weak and near its demise. It only took a small child to clump away at whole bits of the wall. Towards the end of the standoff, in 401 A.T., the wall finally collapsed. The siege of dunsgate began, and while the Korsian formulated their plan of attack, they found the wall to be completely out of repair. After but a single volley, the wall crumbled and fell. The Korsians marched forward into dunsgate, but were just held back by more rudimentary defenses just inside the city.

The area has stood in ruins for hundreds of years now, as the wall still grasps against the grass to the west of Dunsgate. Only minor accounts remain of what it once stood for. Its purpose has now been overshadowed by smaller structures. A more complete wall had been constructed in the immediate vicinity of the city that was far more effective.


Soldier Accounts​
“I remember when the wall stood tall, right over there. I mean, its sorta there, but you can easily pull some rock down and climb over. Thats not a real wall, thats just a joke.”


Account 1, an ancient document pertaining to the wall’s building under Baldyr.

“The wall that stands to our east has been most helpful in many invasions. The barbarians to our west would have had a good chance to destroy us if it wasn’t for that great thing. I’ve seen hundreds of men press their bodies against it, writhing and wriggling like worms as arrows fell upon their heads. Of course, this is to no avail, and wave after wave of men comes crashing in, and out, wave after wave. Heh…”


Account 2, a soldier on leave sent a letter to his captain asking what the purpose of the wall was, approximately dated 256 A.T. As far as scholars know, the letter never reached its destination, and was found in the woods to the northwest of dunsgate.

I hope this letter finds you well. It has come to my attention that the campaign to the north has you preoccupied, and although I am gone for now, I wish to make the best time I can. I have been wondering though, if we are to march north again and again, why do we need this blasted structure to our west? It has served no purpose in many years, and hardly keeps our borders safe from the true enemies. Alas, I should not be so doubtful, our king has done well, and my pockets are full, so I have no shame for that. When this finds you, remember to keep a spot open by the fire in a few moons.
Your Trusted man


Account 3, Early 401 A.T. The third battle of Dunsgate’s West saw the wall deteriorate once more, just before its final ending in the fourth battle of the west. A commander expresses his gratitude and concerns to the king about the wall. A law officer writes the exchange down.

Commander Kestran- “Thank you for the audience my grace. I want to first thank you for the resources that led to Oserian victory this week, for all the help you have given us, I cannot express the full extent of my gratitude.”

King Medouran I- “And I thank you commander for leading those forces to victory, it could not have been easy.”

Commander Kestran-”Thank you your grace, but I must bring something to your attention as well. As we fought, a large chunk of the wall fell down to their siege engines, it was not enough to bring the wall down, or allow a large amount of them through, but because of the wall’s integrity, I am afraid another such engagement will see it bleed, and the city with her.

King Medouran I-”While I appreciate the concern, It is simply to expensive to take care of, the Korsians demand attention elsewhere, there can be no more room to fortify the wall.”

Commander Kestran-”Sir, I highly recommend finding the funds, patchwork jobs is all we can get nowdays, and more and more of the wall is formed of…”

King Medouran I-”I appreciate the sentiment, but I cannot, if you ask further, prod further, you shan’t see another penny for it, you are lucky i just don’t reserve the money for the closer wall.”


Account 4, 450 A.T. A soldier who was 17 during the Fourth battle of Dunsgate’s west recounts his experiences 49 years later in a small sample passage.


“Sometimes, it feels like it was just yesterday, I remember sitting on that wall, I always knew it would get me killed, but it felt so safe at the time. I remember when the wall stood tall, right over there. I mean, its sorta there, but you can easily pull some rock down and climb over. Thats not a real wall, thats just a joke now. When I saw the wall standing, it gave me a symbol to look at this people with pride, but now, its hard. I remember the screams now, the cutting of the innocent in the streets, the look of the western devils as their sandy hooves galloped over the burning pavement. ‘Not me please, not me!’ of course, he didnt listen to the man. We barely managed to make it back to the castle after the second wall fell. It wasnt supposed to be so many men, but when we were boxed in like animals, it got easier to kill. I fought and fought, and fought, then i fought some more, before I remember not seeing another devil around me. I was still flailing from what my comrades told me, when the time had come to leave. Back to the wall, we had lost it almost 30 minutes after the battle began. I sat on top, when the first siege engines rolled in, and after only 3 blows, collapsed the whole damn thing. I managed to get away with only a minor leg scrape, but my captain wasnt so lucky. We did the only thing we could do, retreated to the second wall. Luckily, I am told the second wall held out far longer before falling, leaving only the scraps to head into the city. But of course, the scraps always feed at the bottom, and are the worst of the worst guests.

That wall was the muscle of this town, flexing in the sunlight, we could do no wrong.”
Reactions: TrueParanormal