You are using an out of date browser. It may not display this or other websites correctly.
You should upgrade or use an alternative browser.
T


Do you have any previous roleplay experience?
Answer -Lord of the craft

Answer - happy to be here

Answer - Taking on the role of another character, and acting and saying how that character would.

Answer -Taking control of the rp, mostly in combat, example, “John leaps forward slashing Henry and Killing him” that's powergaming because he didn’t give the person time to respond, nor stop him. Powergamed characters usually never fail and are the best at everything

Answer -Meatgaming is the action of using information learned out of Character in roleplay. Such as information from posts, or past characters.

Answer -The perfected character, they manage to great at tasks even with little training or knowledge about them. 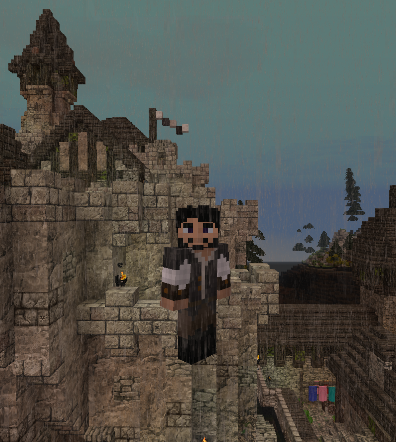 Answer -
Louis was born falling the Great Death, his family was one of few in his villages to survive the plague. With the fields dying and food short they were forced to move closer to Dunsgate leaving their home behind when Louis was only a few years old. Louis spent of of his childhood playing soldier with the few kids in Dunsgate, he would love to watch the guard make their rounds on the walls. He dreamed of one day joining the army and serving alongside the King. Louis's Father had once they moved worked in the local blacksmith. He even saved enough to buy Louis a sword when he was fifteen allowing him to train for combat. While no skilled fighter he showed promise. Then his father lost the job following an accident that left back hurt making him unable to work.
Louis attempted to follow in his father's footsteps, trying his hand at blacksmithing, but to no avail, he was soon out of business. He then worked for a large merchant group, serving as a caravan worker, loading and unloading cargo off of ships and wagons. This was able to provide a livable income for himself and his parents until the Civil War broke out. The merchants replaced the laborers for guards, seeing it more important to secure the goods rather than speed. Louis was one of the many laborers who were fired.
Louis, now burdened with finding a way to survive once more, picked up his sword and marched to join the loyalist army. He joined out of a need to provide for the family and a sense of duty to his country. His alignment to the loyalist side would be due to his many lessons his father taught him of duty and the importance of honor, which the rebels had none of.

Answer: Louis stumbles a bit forward when he sees the man running, he’d jump to tackle the man, causing both of them to fall to the ground. The thief drops his belongings as he tumbles to the ground, Louis begins swinging his fists wilding at the Thief's face. However, the thief is able to push Louis off easily, confused and with his vision hassy he watches the thief run off. He begins calling for help, if there's any guard nearby they would run to see what the commotion was about.

Answer: Louis slums against the cart, he’d be hired to guard one of the caravans to the city of Telth, promised a cut of the money made from the merchants selling their wares. Now he's stuck in some backwater camp, might not even get paid now. Louis begins to walk around the camp looking for a place to grab a drink, it will help pass the time at least. Finally he finds a crowded tent selling drinks, Louis pays for an ale with the little money he has and begins flirty with the local women. Maybe he’ll make something out of this yet.

Answer: Louis freezes, he’d never seen much combat in his short life. He backs away from the man clearly terrified by what he saw. “That could have been me, or one of my friends. . “ Louis shakes his head, “No,” he thinks “This is war.” Louis steps forward, the soldier barely even looks up when Louis raises his sword, he’d close his eyes before swinging downward toward the man’s neck. The blade only goes a third of the way in panic Louis pulls the sword free, the Soldier grabs the wound and begins choking on his own blood. Louis stumbles backward failing, “I. . . I just took another man's life,” he thought.

1. You speak of the metagaming rule in the question about agreeing to all rules. Correct it accordingly to make sense.

2. Your character's backstory is very short and vague. Try to elaborate at least a little bit. In 19 years, plenty could have happened to shape a personality. Why does he care so much for the civil war? What kind of stories would he assume to bring back, what has he heard of wars and kings so far? Would he really expect to bring back riches from the war - surely there would be a risk to never return to his helpless father.

3. For your open ended question one, keep in mind the limits of intoxication and see if it needs be edited.

Once that is done, make a comment affirming you have made these changes and your application will be reviewed again as soon as possible.​
T

Changes have been made
T

1. You speak of the metagaming rule in the question about agreeing to all rules. Correct it accordingly to make sense.

2. Your character's backstory is very short and vague. Try to elaborate at least a little bit. In 19 years, plenty could have happened to shape a personality. Why does he care so much for the civil war? What kind of stories would he assume to bring back, what has he heard of wars and kings so far? Would he really expect to bring back riches from the war - surely there would be a risk to never return to his helpless father.

3. For your open ended question one, keep in mind the limits of intoxication and see if it needs be edited.

Once that is done, make a comment affirming you have made these changes and your application will be reviewed again as soon as possible.​
Click to expand...