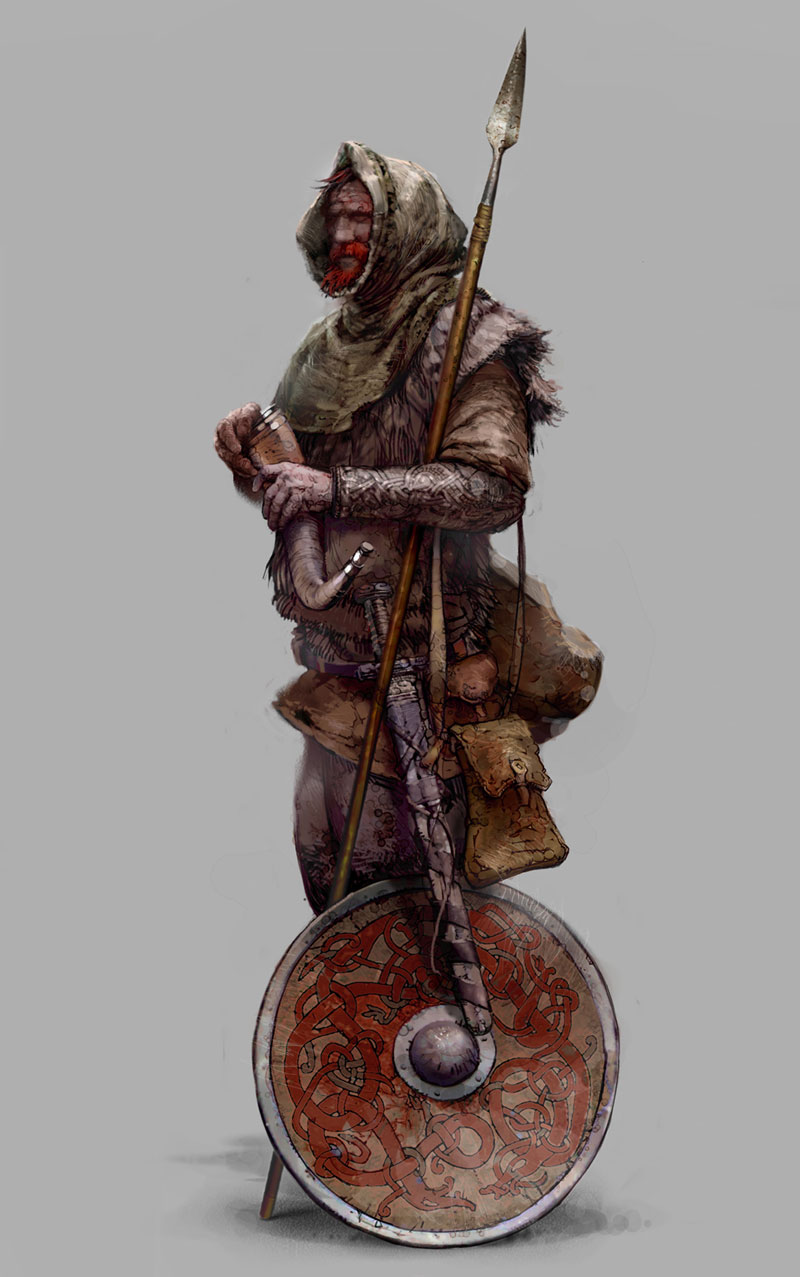 (Artwork by Stian Dahlslett)
"If the years go by and the threats to my nation only grow, then so too shall my strength and conviction."

Birthplace
A village near the Flintswood border

Torvald stand at 6'7 and weighs 130kg, sporting a well muscled physique forged through the hardships of the North (and good food!) He has red hair, making him easy to spot in a busy street or blizzard alike, and a matching beard that he proudly maintains. Recent events has seen several deep scars appear on his face, having been on the receiving end of a female Giagesh.

He used to grin often and to many people, but after many years spent in the service of Averlash only alcohol and particular people can bring this out in him.

Sight
Torvald enjoys the wild nature of the North, seeing the snow fall and the wind howling through the wilderness. He enjoys looking at the fire in his forge, bringing him to calm peace in his forge. He strongly dislikes seeing mutilated or injured creatures. Recent events has fostered a large dislike for the sight of Osarians, a hate for the pompous bastards festering within him.​
Sound
Torvald enjoys hearing the birds chirping and the flow of water down a river. The crackle of the forge during late hours, and the sound of iron being bent to his will. He dislikes the sound of crying, believing it to be a sign of weakness.

Taste
The first sip of a cold ale, oh how much joy it brings! He also enjoys any meat, though venison is a particular favourite of his. He has developed a strong hate of Drahl Grovi fruit after chomping on one during his travels, almost vomiting in doing so.

Touch
The hard grip of his forge hammer, nothing brings him better clarity and focus than his hammer does. The touch of weapons gives him a strong sense of being (and security). He very much enjoys the cold snow touching his face as it falls from the sky, giving him a small smile as it does.

Smell
Rotting corpses bring him no end of disgust. He enjoys the smell of ale and a the sweet smell of berries in the wild.​

Background and journey so far

Born screaming into the world, the baby who would be named Torvald was not expected to survive the coming winter, as was the normal outlook with all Northern children. But he did, and so this story will do it's best to detail his life so far.

Raised alongside two brothers; Torygg and Amund, Torvald was introduced to the world through the time spent in his village, wandering the frozen muddy streets and swinging from the hard branches of surrounding trees. His father Gunrik Gunderson was a proud man, raising the boys alone after the passing of his wife, he showed his three sons all he could offer; the sights of easily spooked deer and ferocious bears observed from a safe distance, the birds soaring through the low hanging branches and the many paths through the land. There was much to take in, and Torvald enjoyed all of it. He spent many years working as an apprentice blacksmith, after taking a liking to the warm glow of the forge and the soft embers found within, and soon learned a lot when it came to making tools and armour. Many years passed, and countless memories and events occurred within that village with Torvald and his family, but everything changed when his father died. Killed by a bear on a hunt, he left behind three grieving sons and a uncertain future.

Leaving the village alongside his two brothers would be a tough decision, but one that they ultimately went through with, taking with them scant few supplies and little experience with the world outside the village border. Torvald wandered the lands, travelling further North all the way to the Glacial, and South to the rich lands of Osteria. He was forced to hunker down when Rithgar claimed the North in it's cold grasp, and found himself in the run-down town of Valdarr. After moving to a permanent home in the now growing town of Skyreach with his cousin Mylo, he watched as his brothers rejoined him and new friends were made, even counting himself lucky to watch Mylo crowned King of the now large kingdom of Averlash.

Now thirty, Torvald is the Warden of the Nation he now inhabits and a changed man. Conflict with the Cult of the One has seen once deeply buried dislike of Osarians come closer to the surface, and frustrations mount over crimes within the Averlash borders. But his heart is set on Flintswood, where Clan Gunderson once ruled decades ago, and with such a wish singing deep within his heart nothing else can dissuade him from his dream. Clan Gunderson would rule strong again, and with Torvald at it's head he set out to reclaim the land his ancestors once held, and his birthright.

Mylo
"Our bond is a close as anything, our time spent in Skyreach has only brought us closer together over the years. We've had our fair share of time spent drinking, and fighting for our lives, and I would do all those again with you Cousin.​
"To see you crowned King after the departure of Mara and to lead Averlash forwards, the pride I hold for you has only grown stronger in the past years cousin. I hope the recent travels you've undertaken have allowed your mind some peace.​
Amund
"Along with Torygg, a man could ask for no better brothers. We've been through the North together for so long, I almost feel as though we can read each other in a instant. I hope you and Torygg enjoy our time spent in our new home of Skyreach together, and when the time comes set out with me to reclaim our Clans home in Flintswood."

"I hold some guilt for the loss of your leg, I should have considered the dangers when facing such a beast, but you and I are Gundersons, and this setback will only make us wiser in the future."

Torygg
"I'm glad those times spent with the Gruhlk only gave you mild trauma and no missing limbs, I'm glad you're alright brother. Along with Amund, we will one day we will set out and reclaim our home, and establish Clan Gunderson in the North once more.

"To see you proposed and are set to marry a woman, by the Five where has the time gone, I wish you and Astrid the best future with many strong children. I only wish you weren't off finding Freki most of the time!"

Mara
"I can't thank you enough for bringing Mylo and I into Skyreach, and trusting us. After swearing an oath to protect you along with Amund and Mylo, I will see to it that my oath is upheld. You have proven yourself time and time again to be a great negotiator, and have the ambition to turn the North into a strong Kingdom."

"Your absence is painful, something I don't like to admit in front of others. You brought us all together in Skyreach, and set the foundation for our strong Kingdom. We all miss you dearly, and I wish you could see us all now."​
Eden
"From humble beginnings seeing you move into the Tavern, to serving us drinks almost daily and sharing stories and laughter with us. I cherish our friendship and hope to see you in the tavern soon for more great times."

"To getting drunk together and having my tarot cards read by you to glancing at the bar where we once conversed, I miss you friend. I hope you return from your travels South and find what you were looking for, be it material or something personal."​
Frederick
"We had a bad start you and I, but with sheer persistence (and some great luck) I've grown to respect you for all you've been through. You've been a part of Skyreach for a long time now, and I trust you to keep her safe as much as any other."

"You were a nuisance most of the time i'll admit that, but your death leaves a gap in the once solid foundation of Averlash. You were a true guardsman and sentinel, and I only wish you could patrol the borders of the town with me once more."​
The Fintons
"I've never trusted you two much in the past, but after hearing Jasper negotiate with Mara and attending your wedding, I've grown to respect you somewhat. Your brother Asher I've only heard a few bloodthirsty rumours, and so I have nothing to comment."

"Bastards the lot of you, to think nobles would stoop so low as to what you pair have done. If you ever set foot in Skyreach again your crime will see you punished."

Cyrine
"You always seem to be around horses and that stable, which isn't a bad thing! I enjoy the little time we have talked together, and hope to get to know you better in the future.

"I'm not a surgeon, so please don't lose any other body parts! Your help in Averlash has been profound, and your action as Sentinel has only elevated my respect for you tenfold."​
Anne
"You have proven yourself to be a great addition to Skyreach, and a woman of strong qualities. You and Cyrine have brought good times to Skyreach, and I hope to continue to get to know you better in time.

I hope you pay Skyreach a visit once more, and that your travels find you good fortune. Your duty as Regent was never in doubt, and I consider you a good friend."

Ziad
"You gave us all a scare with that time you almost died friend. I've been making a few experiments with that arm replacement for you, I hope you can come try it out in time!"​
"By the Five, i've still got that bloody arm replacement for you sitting in the back of my forge! Do smack me and remind me about it friend!"​
Allura
"You know that a secret to a mans heart (and friendship!) is through alcohol. Your job as an innkeeper has brought nothing but great times to me and the rest of Skyreach (I'm truly sorry about all the damages I have caused.)

Byrne
"I could write for a year and still be in doubt with how to describe the beast you are, so i'll just say this. You are truly worthy to be a part of Clan Gunderson, and I wish us the best of things to come."

Drake
"Confident with a bow and dastardly fast with a blade, i'm happy to have you on our side! Although much like a past guardsman I once knew, you sometimes get under peoples skin, but i'm sure in the coming years we can laugh at past adventures as true friends."

Adan
"Your assistance alongside Cyrine has only helped Averlash and her people, I look forward to attending the wedding between you two!

Zhaw
"Please speak in a tongue I can understand.. I beg you."

Yatur
"To think that you dwarf every man in Averlash, your might has not been wasted in aiding us friend. I enjoy times we spend facing down the monsters of the land, and wish you the best as a true northerner."

-Updated relationships and added backstory
(Feel free to ask for your character to be added to relationships!)
Reactions: datlablu, Gillethoin, PurpleKnight and 1 other person