(Please give examples, no experience is acceptable)


Yes, I started playing roleplaying games such as D&D 3e with my friend when I was about 10, and ever since my interest has just grown over the years. I've also played on other minecraft rp servers and triedother table top rpg's.

Please answer these definitions using your own words, the definitions may be researched however not plagiarized (copy-pasted).

It’s when you act from the perspective of a character, follow its ambitions and beliefs. Could be explained as a form of theatre.

Power-gaming is when you forcefully alters the role-play in your advantage. It could be that you emote: "*Swings his sword towards the man and cleaves his head by the neck." That emote doesn't leave anything up to the other player/players, everything goes your way.

Meta-gaming is the term used to describe the act of using information, that you learned of out of your character, in a role-play scenario.

A Mary-Sue character is a character that has skills and or powers that are unexplainable - they have no explanation as to why the character has these powers.

Out Of Character. It's used for talking to the player rather than the character.

Here you will create an example character that could exist in the server’s history and lore.

Provide us with an in-game screenshot of your character’s skin. 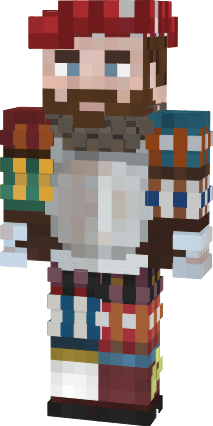 Being born in a village located near the border of Oserian and Northern lands, Konrad developed a rather strange accent. It was something in between Northern and Oresian, though not very prominent some words may differentiate. His father was the local potter of the village and teached Konrad of this craft from an early age, wanting him to become his apprentice artisan in order to become a master in the end. However, this was never Konrad’s plan at all, he longed for excitement. Pottery did not do it for him, he wanted “real” excitement, like what he felt that time when he was 13 years old and managed to scare off a burglar using his father’s dagger. He experienced such adrenaline rush, he felt so powerful. That was nothing like the boring pottery his father tried to get him into.

So one day, when Konrad was 16 springs old, he packed a knapsack of necessary supplies and grabbed his father’s dagger along with a spear that he bought for some coin he had also “borrowed” from his old man. Konrad set out to fight local criminals in exchange for a small bit of coin - though enough to keep him alive, and to pay the rooms at various taverns. He performed his work in the nearby villages and managed to make a minor name for himself as “The Wandering Guardsman”. Although he was happy with this new name, he was not quite satisfied with only handling petty thieves and burglars. No, he was now almost 20 years old and felt like he needed some change in his life.

As the young, somewhat self-proclaimed guardsman was on his way to a reported ongoing burglary, an opportunity revealed itself. A man halted him on his way, pleading for help. Apparently the man was a soldier that had been poorly treated by his officer, and the soldier pleaded Konrad to dress up in his uniform and take his place among the ranks - the payment would be better than whatever he already made, the soldier assured him. Konrad offered a shrug and accepted this new attire, it looked like a rather strange uniform, though he dared not ask about it - he knew so little about the military. After Konrad was done dressing, the soldier thanked him many times before he walked off with haste. Konrad would later learn, however, that the ‘soldier’ was no soldier, but in fact a mere sellsword, and that he had accepted a mission that was more than he could handle. Now the employer was looking for the sellsword to sort out some unfinished business. Little did the employer know that Konrad now was in the sellsword’s shoes - literally…

Please answer at least three of the questions to show how your character would interact with the world. Delete the spares (if applicable). Please include at least one paragraph for each question you answer.


You've gotten lost and wandered awhile into Drahl lands, eventually finding yourself in Crookmire Swamp, where you decide to settle for the night. Finding a meal to buy for the evening takes some effort, but you do come across an old crone in ragged clothing, who offers to sell you some sea-looking food. She doesn't ask much, but warns you that eating it is 'unpleasant' to outsiders. You...

“Aah gut, sea-food, jah!” Konrad offered a bright smile to the crone, waiting to receive the food from her. In return he would hand the hag some coin from his purse. After the transaction was completed, Konrad dug in on the plate using his hands, placing pieces of the food into his mouth. He would eat the chewy substance without any second thoughts - he was too hungry to be picky. After he managed process the tough food, he produces a small handkerchief from his knapsack to wipe his hands on, also wiping around his mouth. Then he would thank the kind hag, still with a smile donning his lips, although internally his stomach was upset with her.


In the midst of battle, you find yourself approaching a wounded enemy soldier. The soldier is on the floor, clearly in terror as they cradle one of the dead. Enemy forces begin to advance in the distance and you know you have to act fast. The soldier then grasps at a cloth and removes it from the dead soldiers pocket. They continue to cry, and starts calling the dead soldier's name in despair. Then the soldier glances up to see you - with your weapon up - but does not care of your approach, continuing to cradle the dead soldier. You…

Konrad eyed the mourning soldier in silence for a while, his spear in a firm grip in both hands. His jaw muscles would tense, his teeth pressing against each other as he decided on what to do - should he leave the soldier be? Or end his suffering? After a while of dithering, he would let out a frustrated grunt, going to strike the enemy across the head with the shaft of the spear, making him unconscious. Konrad figured he made a compromise between the two options by knocking the man out instead of killing him.


You have wandered across a seemingly endless tundra for what have felt like days. A raging snowstorm makes you unable to see more than a few metres ahead. Being almost out of resources, you are delighted to find out that you have stumbled your way to a village. Upon closer inspection you find out it's a Northern village, and the residents are not very friendly towards strangers. What do you do in this dire situation?

Living rather near Northern lands, Konrad has grown to understand their ways somewhat, having spent some time with them. Having quite some Northern blood running through his veins, Konrad do not appear as much of a stranger to the Northerners. Would enter the village, offering to pay the coin that was on him in order to stay for the night in shelter of the storm. He then prayed he would not get stabbed in his sleep by any of the locals.

Your background implies relationships to characters that won't be played by other player's unless you talked beforehand, so be ready for that.

Also keep in mind that a mary-sue may not be just ultimate skill, but could just mean without any flaws.