You are using an out of date browser. It may not display this or other websites correctly.
You should upgrade or use an alternative browser.
Y

What is your favourite colour? Both sky blue and RGB blue (#00F)

Have you read the rules? Yes

Do you fully agree to the rules and...​
If yes, which is your favourite?

If no, what would you change?​
Yes. My favorite rule is the common sense one as that summarizes all other rules. It makes sense you can't power game but that should be common sense.

How did you hear about Tale of Banners? A friend of mine told about it

What is your previous roleplay experience? I have started on LARP, then I started roleplay on three other servers and I do Dungeons and Dragons as well. This all in a year time xD

Is there anything you would like to add?​
I am really looking forward to get started here!

What is powergaming? Powergaming is decide for other chars what happens to them. You can not just tell someone else dies, he or she always has to decide that for him- or herself

What is metagaming? Metagaming is using information your character does not know. For example: When you are a biologist you can not use everything you know, for a lot of it was not known yet in the Middle-Ages.

What is a Mary-Sue? Mary-Sue means you make a character who is the perfect way of yourself. For example, Jalokivi is my Mary-Sue character as she is way nicer than me and has everything I want to have. At least I think it means that​
Part 3 of 4
Character
​
MineCraft skin's screenshot:
I usually alter between following two skins. Those screenshots are made with use of CustomNPCs and during roleplay I usually use MorePlayerModels 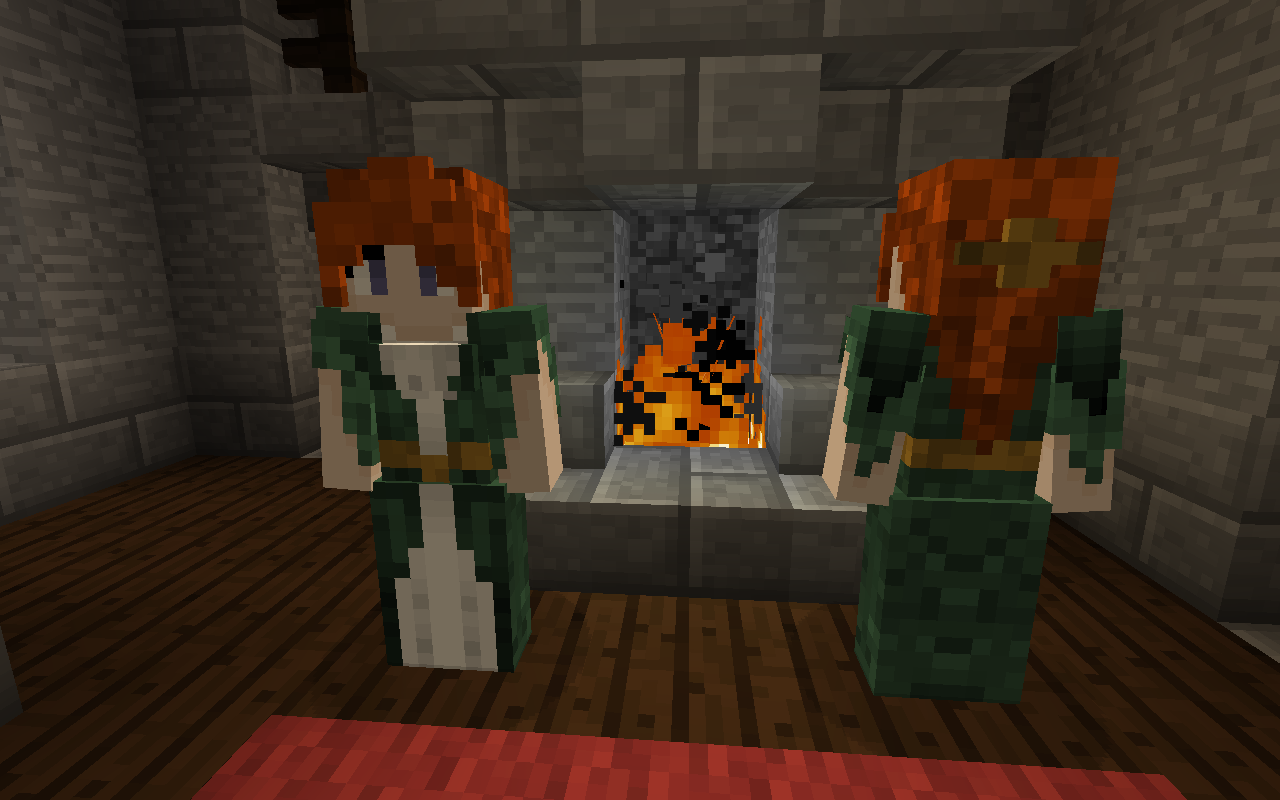 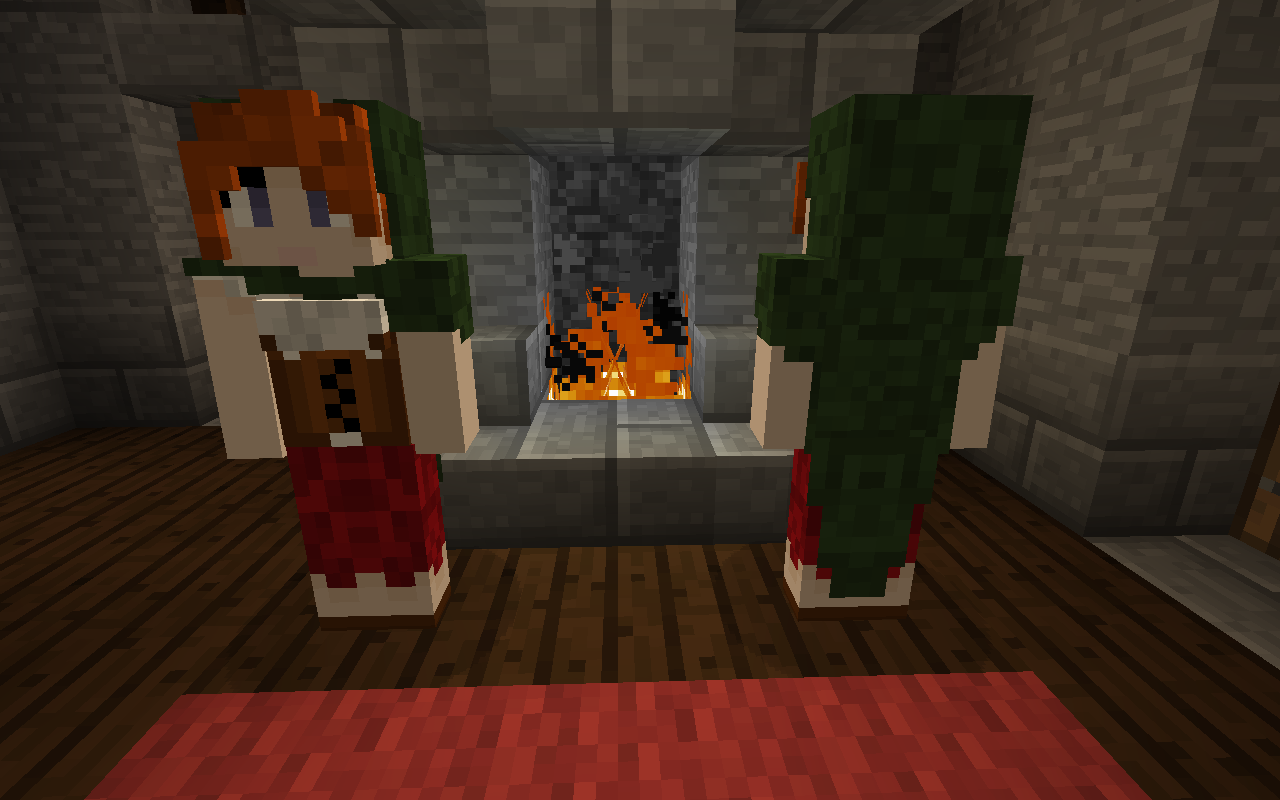 I'd like to note here that I should change her face. On both skins I intend to use the face given on the upper one.

Story & details:​
I have never really known my father. According to my mother he was dead, according to my brothers he would always be out sailing or with another woman. I had no clue so I just believed he was gone.
My mum raised us three on her own. At first she was really loving and caring but the older I came the weirder she started to act. When I was sixteen I left the house because she acted too weird in my opinion.

I packed my most beautiful dress, one with a corset and a nice skirt and another set of clothes and put that in a big enough bag. Then, with some spare food I left home. I wouldn't miss my mother. After her acting as she did… not really. And my brothers would be able to continue their life together.

I lived in the village closest to my house, hiding myself and my valuables in empty houses. The money I had I used really carefully, buying the cheapest vegetables until I could find myself a proper occupation. But I have never been working so I got fired almost everywhere where I tried to work.

One day, after I just got fired I sat on a fountain, looking at people. A girl with red hair, just like me, drew my attention. She had seen me too and came closer to me. It struck me how much we looked alike.
After a little talking we found out that we both owned a hair pin which looked alike. Our names were alike and our features. Our age was the same and so was our surname. This girl was my sister. Despite my mother calling me Thena instead of Theli she never mentioned something about a twin sister. But I had one and we could roam around together!
~When the roleplay starts we have roamed around together for a little while already~


​
Part 4 of 4
Open-ended questions
At least three must be answered. Delete the spare(if applicable).
​
Q1
You find yourself in an arena surrounded by high sandstone walls. Much like all the dozen of strangers in the arena, you only have a robe - the single weapon is a spear on the ground, in the very centre of the arena. You are a short sprint's distance from it - closer than most of the others - but even so the others have already spotted it and are running to grab it. They seem to be ready to fight for their lives. You...

....have never learnt how to fight and start panicking. I can never be fast enough to grab the spear so I run away, to the wall closest by. I press myself against it, whilst tearing a bit of fabric from the robe. I will not start to fight but when necessary I might be able to use the fabric to defend myself from someone who tries to kill me. I quickly look around to see if Naji is there. She stands on the other side of the arena. Fighting. Then I see someone approach me and before I can wrap the cloth around his neck he hits me on my head and everything goes black.

Q2
You're heading home after some drinking at the tavern. Just before you're about to pass an alleyway, a hooded man rushes out of it and runs for it - seemingly, he has both a blade and some jewellery on him. You take a quick peek in the alleyway to see a feminine figure collapsed on the ground, holding her hands over a bleeding wound in her torso. The thief is about to escape and the woman seems in critical condition. You...

... Look at Naji for a moment. While she goes after the thief I lift my skirts to rush over to the woman. I examine the wound and mess around in my bag to get some bandages. I bandage her and try to get her back conscious. But whatever I try, it does not work. I start screaming "HELLO, SOMEONE THERE? I NEED HELP!" But again, no response. I stay with the lady, just in case and wait for Naji to get back.

Q3
You've gotten lost and wandered awhile, eventually finding yourself in Crookmire Swamp, where you decide to settle for the night. Finding a meal to buy for the evening takes some effort, but you do come across an old crone in ragged clothing, who offers to sell you some sea-looking food. She doesn't ask much, but warns you that eating it is 'unpleasant' to outsiders. You...

.... wrinkle my nose by the seeing of the food. I quickly discuss with myself what to do as it might be the only chance to survive. Then I look back at the crone and ask what she means with 'Unpleasant.' She explains that the usual outsider is not used to this kind of food and that they may get slightly ill of it. Before I buy the food I ask her if she knows the way out of this swamp and if yes, how long it will take. When it will take too long I buy the food in case of emergency and otherwise I get out and buy food I am used to in the village closest to the swamp. If no, I buy the food too and continue my way to try and find the way out.​
Last edited: Jun 19, 2017

Hello! I am Verando and I will be reviewing your application today. You're application has been..

Your role play responses were great! You could expand on your backstory if you wish. I would like you to message me about the twin also, and Naji.

Welcome to The Tale of Banners, the great realm of Esna.